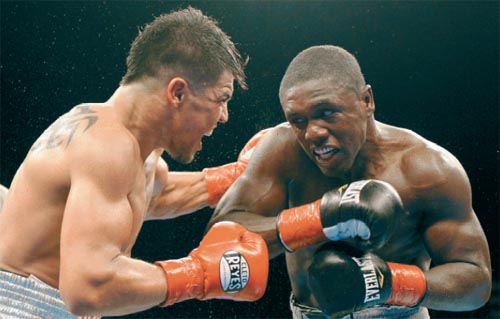 Berto had made five successful title defenses since he took the WBC welterweight crown in June 2008, when he knocked out Miguel Rodriguez in the seventh round.

On Saturday night, Berto (27-1) was nearly knocked out in first round. Ortiz came out firing combinations from the bell, stunning Berto with a right hand followed by a left hook that put the champion on the canvas.

With Berto clearly dazed, Ortiz tried to finish his rival off. He produced another knockdown but Berto made it to the end of the round.

Ortiz appeared to be in command in the second round, when out of nowhere, Berto connected with a short right hand that sent Ortiz backpedaling. He didn’t go down but took a brief count from referee Michael Ortega.

The brisk pace continued in round 3 with Ortiz continuing to apply the pressure. Ortiz continued to stalk Berto in round 4. Berto kept waving at his opponent to keep coming forward, and Ortiz was happy to oblige.

Berto, 27, came alive in the sixth round and was pummeling Ortiz until a left hook flattened Berto seconds before the round ended. Berto got up with no trouble just before the bell sounded to end the round.

After three uneventful rounds, Berto landed a good right to begin the 10th. Ortiz, who had been warned about hitting in the back of the head, had a point taken away by Ortega. That seemed to motivate him and he finished with a solid combination.