No clear winner in 3 races

No clear winner in 3 races

No candidates are standing out as potential winners in either of the three legislative by-elections in Bundang, Gimhae and Suncheon as the intense multi-partisan competition is nearing the final phase before the April 27 elections, a JoongAng Ilbo survey showed yesterday. The ruling Grand National Party was leading only in the Gangwon gubernatorial race.

The survey was conducted between Thursday and Saturday by telephone. Seven hundred adults were surveyed each in Bundang and Gangwon while 600 were surveyed in Gimhae and Suncheon.

In the Bundang B District of Gyeonggi, Sohn Hak-kyu, chairman of the major opposition Democratic Party, was leading Kang Jae-sup, former GNP chairman by 43.8 percent to 35.4 percent in the poll.

The disparity was reduced to within the margin of error, to 46.5 percent and 44.5 percent, among the so-called “voting-certain class.” The class refers to those who voted in every previous presidential and legislative elections and have pledged to vote in the upcoming by-elections. The margin of error in the JoongAng Ilbo survey in the Bundang district was 3.7 percentage points.

In the Gimhae B District of Busan, Lee Bong-su, from the People’s Participation Party, gained 41.4 percent support, compared with the GNP’s Kim Tae-ho’s 37.1 percent. But, among the voting-certain class, the gap was lowered to 44.1 percent and 42.5 percent, within the margin of error of 4 percentage points.

In Suncheon, South Jeolla, the top three candidates were neck-and-neck. Kim Seon-dong of the Democratic Labor Party was at 15.8 percent, followed by independent Gu Hi-seung at 15.3 percent and independent Jo Seon-yong at 13.8 percent. The margin of error in the Suncheon survey was 4 percentage points. The GNP didn’t field a candidate in Suncheon.

In the Gangwon gubernatorial race, featuring a rivalry between two former MBC presidents, Ohm Ki-young, of the GNP, was a clear winner over the DP’s Choi Moon-soon by 48.5 percent to 28.5 percent. In the voting-certain class, Ohm was more ahead with 51.9 percent, compared with Choi’s 31.7 percent. 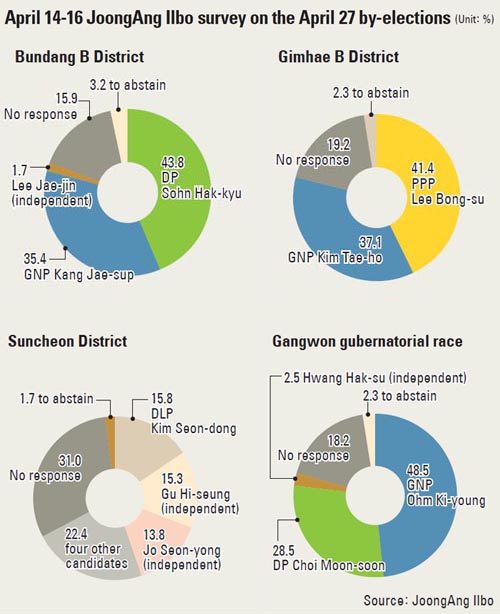 The four districts are the most spotlighted areas of the April 27 by-elections, where vacancies in the National Assembly, local governments and councils will be filled through 38 elections nationwide.

The GNP leadership is planning to put increasing support behind its campaigners, but in particular behind Kang in Bundang, with GNP Chairman Ahn Sang-soo to launch a supporting campaign in Seongnam city beginning tomorrow.

“We can be neither pessimistic nor optimistic. Any kind of situation, such as 3 to 0 [GNP versus other parties] and 0 to 3, could unfold,” GNP spokesman Ahn Hyung-hwan said. But, Ahn said things are not as bad as it was initially concerned they would be. “The candidates from other parties are not showing as strong a drive as expected, while our candidates are putting up a good fight,” he said.

Experts said two decisive factors in the Bundang election would be the campaigns appealing to undecided voters and the voting rates of those in their 20s, 30s and 40s.

The GNP is refusing to be complacent about the Gangwon seat, with Chairman Ahn calling Ohm’s lead “a slight lead in a neck-and-neck race.” The GNP is concerned over the anti-government public sentiment in Gangwon after a series of failures to win huge state projects.