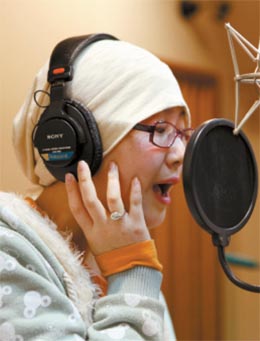 Shin Min-ji, 16, during a recording session. Provided by the organization.

As soon as Shin Min-ji, 16, walked out with a bright new makeover, Shin’s mother was overjoyed, immediately snapping pictures of her daughter, who had looked pale and drawn for months.

In November 2009, Shin, then a typical 14-year-old middle school student, was diagnosed with ovarian cancer. She underwent surgery and chemotherapy which led to her losing her long black hair as well as her bright spirit.

“It was like a bolt [of lightning]. Min-ji was so healthy she hardly ever went to see a doctor or even caught a cold,” said Shin’s mother, Lee Jeong-hee, 38.

But things are going much better for this high-spirited teenager now and on April 9, Shin and her mother boarded a bus to Seoul from Daejeon to make the final recordings for an album by Shin. On this much brighter day, she had her hair and makeup done and had a photo shoot for her album cover. She was nearing the end of an eight-month long journey of having her wish of becoming a singer come true.

Shin’s wish is being granted by the Make-A-Wish Korea, which was established in 2002. The Make-A-Wish Foundation is a U.S.-based worldwide organization that does its best to grant wishes to children with life-threatening medical conditions ranging from leukemia to brain tumors.

April 29 marks the 31st anniversary of the wish that inspired the creation of the foundation to a boy named Christopher, who wanted to see what it was like to be a police officer. In honor of Christopher’s wish, the foundation designated the day as World Wish Day and in each country that has a branch foundation children have their wishes granted on that day.

Shin’s debut will actually be one day later at the Prudential Hall in southern Seoul.

“It’s like a dream; my dream is literally coming true,” said Shin staring into a mirror. “To be honest, I didn’t really like wearing this long hair wig at first because it didn’t look like me but now I think I’m pretty in it.”

After losing her hair from chemotherapy, Shin said she had a hard time trying to get used to the short, sporty hairstyle. “I feel like I’m back to myself like before I became sick. I used to have really nice, long hair,” Shin said.

Both Shin and her mother didn’t know about the foundation until after her operation in Seoul.

In October 2009, Shin came home from school early with a stomach ache. When her mother took her to a nearby hospital, the doctor told her Shin was just having acute indigestion. But when Shin’s condition didn’t improve during the following month, Lee took her daughter to a larger hospital for tests.

The doctor told them that Shin was suffering from a rare form of ovarian cancer and that she needed surgery at a bigger hospital in Seoul immediately.

The operation was successful but Shin then had to undergo chemotherapy. “Min-ji spent days staring out the window feeling low all day long,” said Lee. “Then these young people wearing blue T-shirts came by and gave us a packet of chips with a sticker that said children’s wishes can be granted through Make-A-Wish Foundation.”

When Shin returned home, she checked out the Web site of the foundation and uploaded her story and a wish.

“I didn’t even know my daughter had that kind of wish or that she had registered one until the foundation phoned to say Min-ji’s wish was selected last summer,” Lee said.

A team of volunteers from the Make-A-Wish Foundation, referred to as “wish angels,” met with Shin on a regular basis. They carefully planned out how to make Shin’s wish come true.

After contacting a wish kid, the Make-A-Wish Foundation searches for companies, individual or groups who are interested in providing a helping hand. And this time, to make Shin’s wish come true, a music production company, hair and makeup studio and a photographer offered to help.

Kwon Young-ho, a respected photographer, has been taking photographs of wish kids for five years. “One point I focus on while taking pictures is trying to make the kids look not sick. Everyone wants to look nice in their pictures and that’s why these children with ailments do not like taking pictures because they look sick in them,” said Kwon.

Shin was happy with the results. “I look so pretty. I don’t think it’s me,” said Shin. But Shin’s mother stood in one corner feeling concerned. “She’s been recording songs all morning and now she’s been taking pictures for more than an hour. I’m worried she might feel unwell after returning home,” said her mother. But without noticing her mother’s concern, Shin posed like a professional model in front of the camera.

“I’m a little tired. But this is my dream. I want to make it right,” said Shin.

Shin received vocal lessons for her album, composed of three songs, which Shin will sing at her debut. The songs were written especially for Shin by the music production company Paul Music. Shin’s three songs will be released through online music providers such as Bugs Music and Yahoo Korea. Shin decided to donate any profits earned to the Make-A-Wish Foundation to make other children’s wishes come true.

So far, 1,614 wishes have been granted by the Korean foundation and 68 are currently under way.