Multifaceted musician gets a rousing revival

Multifaceted musician gets a rousing revival 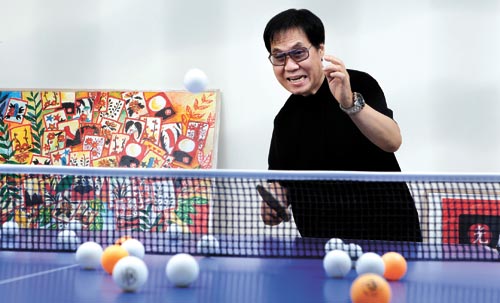 Cho Young-nam plays table tennis at his home in Cheongdam-dong, southern Seoul. In the background are Cho’s hwatu paintings, which he did 20 years ago. The multitalented artist is experiencing a revival with a new album, a forthcoming book and a series of concerts. By Choi Jae-young


Inside Cho Young-nam’s home in Cheongdam-dong, in the center of Seoul’s ritziest district, a table-tennis table and automatic ball launcher anchor the living room. Situated across from a luxurious, chestnut-colored leather couch, the table looks about as foreign there as a laptop in a jungle.

In fact, the whole place seems to have multiple personality disorder. On the far end of the room next to the couch, past a wall of windows with majestic views of the Han River, stands an easel with paint tubes scattered around it.

At the end of a small passageway is his study, its four walls covered with stacks of books. The main feature of the study is a grand piano.

“A friend suggested that I start playing Ping-Pong and get some exercise,” Cho, the 66-year-old singer, painter, author and TV and radio personality, said as he raised his racket and hit the blue table-tennis balls spewing out of the machine.

Once our interview started, he picked up his paintbrush and sat in front of his easel.

“Whenever I do interviews with reporters, I paint while answering questions. It saves me time and I get to finish my artworks,” he said, now staring intently at the canvas in front of him through his iconic, black-rimmed glasses.

Cho, a fixture on the local popular music scene since the 1970s, is currently enjoying a second coming of sorts.

He released a new album, “Cho Young-nam, Song and Life,” in December and has been doing concerts - most recently in March - to promote it.

His revival was prompted by appearances on the popular network television program “Nolleowa” (“Come to Play”). He first appeared on the show during its Chuseok special last year with three other musicians from his generation (Song Chang-sik, Yoon Hyung-ju and Kim Se-hwan). The four musicians appeared on the show again during this year’s Lunar New Year special, which brought the show ratings of close to 20 percent, one of the highest ratings in its 13-year history. 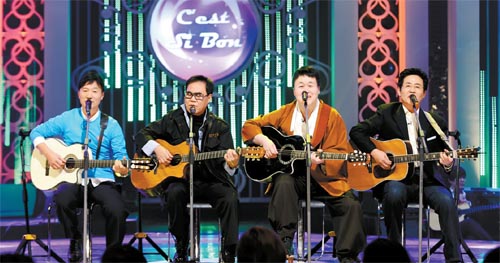 
The shows marked the first time the four musicians were featured together on a talk show. They spent most of their time reminiscing about the now-defunct music lounge C’est Si Bon, which, during its heyday in the 1970s, was located in Mugyo-dong, central Seoul.

The four met at the lounge and would later collaborate on music projects or play concerts there. These days, they are together again and preparing to write a book about their C’est Si Bon days. They will also release a C’est Si Bon compilation CD with other artists of the era.

As a club devoted to music - both live and recorded - C’est Si Bon was the first of its kind in Korea. It drew crowds of young people craving for modern pop music, most of which was heavily influenced by the West.

Cho - along with other artists who would later gain fame through their association with the lounge, including Twin Folio (the duo of Song and Yoon), Kim Min-gi, Yang Hee-eun, Lee Jang-hee and Kim Se-hwan - was at the center of a brand new breed of pop culture in Korea amidst the country’s political democratization and economic boom.

“C’est Si Bon signaled the start of ‘blue jean culture,’ when young people like myself began listening to pop or rock music from the West, drank beer and started expressing themselves more freely,” he said.

Back when he was a student of classical music at Seoul National University, popular music lounges like C’est Si Bon were “taboo,” Cho said. In many cases, the songs made in that era - some of them by C’est Si Bon artists - were banned altogether by government censors, who labeled them as being antigovernment.

It was at C’est Si Bon, however, where Cho got his first taste of fame. His renditions of Western blues and folk music quickly earned him the attention of his peers and later, national recognition. His classically trained voice, strong yet versatile, combined with his mischievous stage presence and talent for harmonizing, made him a star. Today, he has nearly 20 full-length albums to his credit.

“I first went to C’est Si Bon out of anger,” he said, as he proceeded to tell a story involving him, a pastor’s daughter and an expensive music stand that, unknown to Cho then, would change the arc of his life and future career.

“I borrowed a music stand from my pastor’s daughter and lost it. Music stands were expensive and rare back then, and rumors spread that I had somehow stolen it. I thought then that I couldn’t even belong to a church. So I went to C’est Si Bon, where people listened to music that was far from my classical music training.”

That first brush with scandal foreshadowed his life in other ways as well. Throughout his 40-year career, Cho’s name has been synonymous with high-voltage rumors, both personal and professional. Two failed marriages (one to actress Yoon Yeo-jeong), a “pro-Japanese” comment during an interview in which a reporter misquoted him and his comments were misconstrued by the public as traitorous, and his foray into painting have all contributed to making Cho one of the most talked-about celebrities in Korea through the years. But the artist seems unfazed by the controversies that have surrounded him.

“Misunderstandings and rumors come with the territory,” he said. In fact, when public opinion turned against him during the controversy over his allegedly “pro-Japanese” comment, he fought back and wrote a book explaining his stance on the matter called “Making a Pro-Japanese Declaration Knowing I’ll Get Beaten to Death” (2005). The book was so controversial that it launched an anti-Cho Young-nam online forum.

“Reporters should be able to ask any question they want, and celebrities should be open to answering them,” he said. “That’s only fair. If [celebrities] don’t want to talk, they shouldn’t have become public figures in the first place.”

Throughout our two-hour interview, Cho was brutally frank in answering every question that came his way.

He said he preferred talking to women he feels comfortable with but joked that he likes young women the best. He said that he had a complex about his appearance and wasn’t uncomfortable saying that he had to raise himself as a teenager after his father passed away from a stroke.

His candid attitude continued as he discussed the arts, film and Internet culture. He said that Lee Chang-dong’s film “Poetry,” which won the best screenplay award at Cannes last year, was “boring” and “took itself too seriously.” He was equally dismissive of the latest television phenomenon, the competition show “Survivor: I Am a Singer” on MBC. The show features veteran Korean singers who compete with their own and others’ Korean pop songs.

“I don’t know why established singers like Lee So-ra or Kim Gun-mo have to go on TV and sing, or why they are so afraid of getting eliminated,” he said. “Singing isn’t just about technique. You must be able to make the audience feel something.”

In another comment, he said that he doesn’t own a computer and thinks Twitter makes people “spiritually exhausted.”

“All this online technology and social media don’t seem to make people more connected or free. In many cases, I think it makes users into anonymous, foul-mouthed people.”

The artist appeared less jaded when discussing art. Starting with a series of paintings of hwatu (Korean playing cards) that he made and exhibited 20 years ago, Cho has continued to hold art exhibitions over the years, making a name for himself with his unique brand of wit and irony. Referring to Cho’s hwatu series and his brand of pop art, some critics have hailed him as a Korean Andy Warhol, though others have criticized his works for lacking depth. Nevertheless, his paintings command an average of 100 million won ($91,812) per piece.

“Why did I start painting? Everything I do, I do it because it’s fun and I enjoy it. I got bored so I started painting,” he said.

Toward the end of the interview, Cho put down his paintbrush and showed me around his study. Suddenly, he sat down at the piano and started playing and singing “Don’t Worry about Me” by Marty Robbins. As I stood there listening to him sing, I thought back to an hour ago, when I had asked whether he prefers singing, painting or being in front of the camera.

“That’s a really boring question. I’ve been asked that so many times. Now I have to make up a fake answer, right?” he had said, laughing.

As I watched Cho, completely immersed in the song, I began to realize that any sort of answer to my question would have been appropriate.