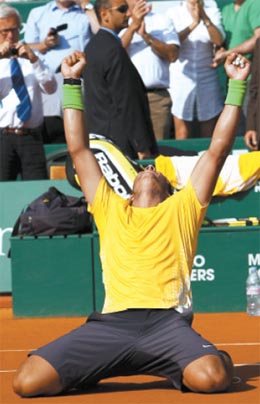 The top-ranked Spaniard chalked up his 37th straight win at the clay-court event, where he has not lost since 2003. It was his 44th career title - but his first since the Japan Open - and his 19th at a Masters event.

“To start the clay season like this is fantastic but it’s more fantastic to win Monte Carlo another time,” Nadal said. “This is the Masters tournament where I feel more emotion when I’m playing, because here in 2003 everything starts. I played qualifiers here, won two matches and was for the very first time in my career in the top 100.”

Nadal won the all-Spanish final when Ferrer sent the ball into the net following a brief exchange.

The 24-year-old Nadal has lost two consecutive Masters finals this year to second-ranked Novak Djokovic, at the Sony Ericsson and BNP Paribas Open. He was also beaten by Roger Federer at the season-ending final of the ATP World Tour Finals in November.

Guillermo Coria of Argentina is the last player to beat Nadal at Monte Carlo, in the third round in 2003. Nadal missed the 2004 tournament through injury.

“Well, Rafa is incredible on clay. I mean, he’s everywhere at the same time,” Ferrer said through a translator. “He’s the best player on clay in history.”

Nadal also extended his Open era record for consecutive titles at a single tournament, having set the mark when he won for the sixth time last year.

He did not drop a set last year, but Andy Murray took one off him in Saturday’s semifinal.

Nadal also beat Ferrer in last year’s Rome Masters final. The 29-year-old Ferrer missed a key point in the 10th game when he fluffed a routine overhead smash that would have put Nadal 15-30 down on his own serve, and then hit a loose forehand too long on the following point.

“Generally speaking I’m very happy. I’m happy with my game also,” said Ferrer, who was aiming for his third title this year and 12th overall. “I was a bit sad about certain moments.”

Nadal held and then broke Ferrer for the fourth time in the match. Ferrer saved one match point when his return clipped the net and bounced just in and out of Nadal’s reach.

But a blistering forehand gave Nadal a second chance to win and he sealed the victory when Ferrer returned a volley into the net.

Nadal, who had conceded his opening service game in his previous two matches to Murray and Ivan Ljubicic, again started slowly, saving two points after dropping to 15-40 down.

Nadal took Ferrer’s serve in the third game but lost his own straight after when Ferrer ended a long rally with a superb drop shot to make it 2-2.

Ferrer continued to struggle - landing only 36 per cent of serves in the first set - and was broken again to trail 3-2.

He failed to take advantage of having Nadal 0-40 down in the sixth game, the defending champion holding to lead 4-2 after the players had swapped drop shots close to the net.

In the second set, Nadal broke Ferrer in third game with a passing shot to lead 2-1. He was untroubled until the eighth game when Nadal’s return from behind the baseline bounced out to make it 4-4 as Ferrer broke him for the second time.

“Well, he’s not a machine. He can lose,” Ferrer said. “Maybe if Rafa has an injury, I will have a chance.”