Hyun Bin to be deployed to NLL

Hyun Bin to be deployed to NLL 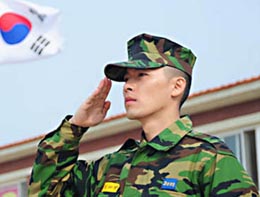 Hyun Bin, the popular television actor from the hit SBS drama “Secret Garden,” has been assigned to a frontline island on the Yellow Sea border with North Korea.

Hyun, 28, who enlisted with the Marines for his compulsory military service, is scheduled to finish basic training this week and will serve with the 6th Marine Brigade on Baengnyeong Island, the Marine Corps said Monday.

The Marines had initially planned to assign Hyun to public relations duty at Marine headquarters in Hwaseong, Gyeonggi, but changed its mind to show that he was not receiving special treatment.

Some critics had recently speculated that Hyun had received special treatment when he was originally assigned to serve in PR, which is generally less dangerous.