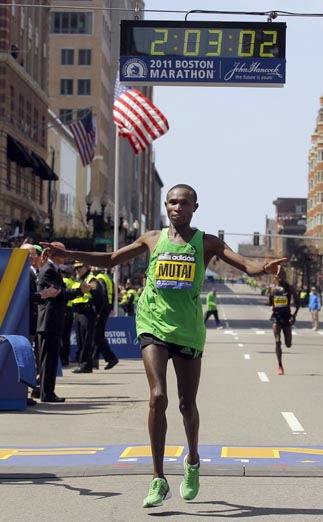 Geoffrey Mutai of Kenya crosses the finish line to win the 2011 Boston Marathon with a time of 2:03:02, the fastest marathon time ever, on Monday. [REUTERS/YONHAP]

BOSTON - Kenya’s Geoffrey Mutai ran the fastest 26.2 miles (42.2 kilometers) in history to win the Boston Marathon on Monday. Then his claim to a world record was swallowed up by the hills.

But not the inclines of Heartbreak Hill that have doomed so many runners before him.

It was the downhill part of the race that makes his time of 2 hours, 3 minutes, 2 seconds ineligible for an official world record. In short: IAAF rules have deemed the oldest and most prestigious marathon in the world - long considered the one of the most difficult, too - to be too easy.

“You don’t look at world records. You just go,” Mutai said. “If you are strong, you push it. But if you put it in your head, you can’t make it.”

“These guys obviously showed us what’s possible for the marathon,” said Hall, whose 2:04:58 is the fastest ever run by an American. “I was out there running, and I was thinking to myself, ‘I can’t believe this is happening right now. I’m running a 2:04 pace, and I can’t even see the leaders.’ It was unreal.”

The IAAF must certify a world record, and it is unlikely to approve Mutai’s feat. The international governing body’s Rule 206 requires courses to start and finish near the same point to discourage downhill, wind-aided runs and the artificially fast times they can produce. (Boston has a net decline of 459 feet, though the course is dominated by up and down hills.)

“We had a stunning performance and an immensely fast time here today,” said Tom Grilk, the head of the Boston Athletic Association, after Mutai ran almost a full minute faster than the sanctioned world record. “We in Boston are well-pleased with what has happened, and that’s good unto itself. The definitions of others, I will leave to them.”

IAAF officials did not immediately respond to e-mails from The Associated Press seeking comment.

Although the organization’s rules clearly disqualify the Boston course from a world record, it does list Cheruiyot’s time in last year’s race among the best times of 2010. Joan Benoit’s 2:22:53 was considered a women’s record in 1983, though that was before the IAAF refined its rules.

Mutai will receive a $50,000 bonus for the world best and another $25,000 for the course record to go with the $150,000 he and women’s winner Caroline Kilel earned for the win. “This gentleman did both things, and we are honored to have played a part in his doing it,” Grilk said.

Kilel won the women’s race to complete the Kenyan sweep, outsprinting American Desiree Davila to win by two seconds in 2:22:36. Davila led as late as the final stretch on Boylston Street and ran the fastest time ever for a U.S. woman, five seconds faster than Benoit, who is now known as Joan Samuelson.

Mutai and Mosop ran side-by-side for the final miles before Mutai pulled ahead for good on Boylston Street. The 19th Kenyan winner in the past 21 years, Mutai raised his arms in the air and grinned.

“When I was coming to Boston, I was not trying to break the world record. But I see the gift from God,” Mutai said. “I’m happy. I don’t have more words to add.”