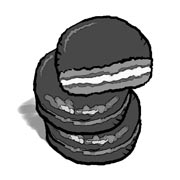 The classic Korean confection is the Choco Pie. It measures 7 centimeters (2.8 inches) in diameter, 2.3 centimeters in thickness and weighs 35 grams. Since its invention in 1974, more than 14 billion pies, worth 1.6 trillion won ($1.47 billion), have been sold in Korea. Its ingredients are simple: chocolate, biscuits and marshmallow. And though it is a uniquely Korean confection, it has international origins.

Chocolate originated with a beverage the Mayans drank 2,600 years ago. A biscuit is a small cake with roots in France. Marshmallow, a sponge-like confection, was originally the name of a bush. Marshmallows in their present form were first introduced in the late 1800s.

Nowadays, Choco Pies are even more popular abroad than at home. Sales in China are especially large, even bigger than they are here. Last year, 400 million pies were sold at home, while 500 million more were sold in China. And sales in Vietnam exceeded 300 million. It has even been said that people in these countries include it in ancestral ceremonies. Thanks to the popularity of the confection, the market share of the Choco Pie is said to be about 60 percent. In Russia, where sweets are popular, some 230 million pies are sold a year.

The pies are also becoming popular in the Middle East. At a Carrefour store in Tehran, Choco Pie sales are said to amount to 50 million won per month, the biggest amount sold at a single store in the world.

The product’s rising popularity in the market has produced a number of copycat products. Nestle, a renowned food and nutrition company, manufactures a similar cake that is sold in Moscow. But Choco Pie still enjoys a dominant position in the global market because consumers have acquired a taste for the original. The secret behind the original is said to be the extra water that keeps the cake hydrated.

These days, Korean men in their 40s and 50s use it as a substitute for a birthday cake, using match sticks in place of candles.

The cake is also popular in North Korea. North Korean workers at the Kaesong Industrial Complex are provided with two to three Choco Pies a day. Many workers regularly pool their pies and take turns collecting the stockpile. The one who gets the cache can sell it and make a substantial profit in the market, according to a North Korean defector.

It is amazing that Choco Pie has created such a wave of goodwill for Korea in the global marketplace.