Capturing the sound of music

Capturing the sound of music 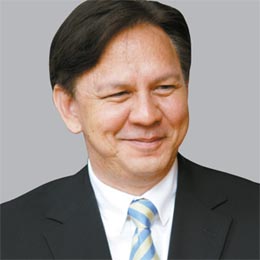 From classical to pop, Universal Music Group, the largest group of record labels in the recording industry, invests in a variety of music genres and artists. Sandy Monteiro, president of South East Asia for the Universal Music Group International, recently visited Korea to participate in the signing of a record contract between the Seoul Philharmonic Orchestra and Deutsche Grammophon, a classical music label owned by the company. In an interview with the Korea JoongAng Daily, Monteiro commented on the quality of Korean artists and was confident that the local music industry has more room to grow.

Monteiro started at Universal Music in 1995, left the group for four years from 1998 and then returned in 2002. He assumed his current post last year.


Q. What are some of the businesses that the Universal Music Group operates in Korea?

A. First of all, we are the largest multinational music company in Korea as well as being the largest in Asia and the world. Our role in Korea has been predominantly in international repertoire. Everybody from Lady GaGa and the Black Eyedpeas to all universal artists. In January last year, we made our first main investment in K-pop by signing a contract with Cube Entertainment. So now we have 4minute, Beast and G.Na under us. And it is a part of our growing strategy. We also have investments in domestic artists such as Kai and Jo Su-mi. And now we have another extension with regards to the signing of the Seoul Philharmonic Orchestra. It’s a great investment. We are also one of the biggest distributors of Korean music outside Korea. So everybody from Wonder Girls, Girl’s Generation, KARA and BIGBANG all come under Universal outside Korea. So I guess our investment in Korea basically is looking at opportunities to generate commercial business proposals for music in Korea and then taking Korean music and marketing both within and outside Korea.

How big is the Korean market?

Korea is among the top three within the Southeast Asian market, which excludes Japan, following Taiwan and Hong Kong. The development of the Korean market in the last four years has been phenomenal. If your rewind the clock maybe six or seven years, I think we really felt that the Korean market was finished. Piracy was very high and there was very low investment in domestic repertoire. I think the feeling was very, very negative. About four years ago, we managed to convince the government to give the industry more support, they brought in more copyright laws. I think they managed to convert a lot of illegal service providers into legal service providers. And so revenues of the Korean music industry have grown.

We’ve seen the recovery in the value of the Korean business which in turn meant the money we made here, we’ve invested back into new artists. So a lot of the Korean wave developments have come in this period and have renewed confidence in the Korean market. And it has been a significant impact for us. We invested in K-pop starting January last year and the result has been excellent. We have taken our investments in artists like Beast and 4minute and generated multi-platinum albums in four or five countries around Asia. So when you get that kind of achievement, the numbers are significant.

What are strength and weakness of the Korean music market?

The strength is that Korea has a population that actually loves music. The other strength is that you have very high quality performances and very high quality production. The negative points are that if you look back10 or 15 years ago when Korea was a feasible market, the Korean market was a very valuable market in dollar terms. The price of a CD was expensive. I mean Korea is an affluent market so we benefited from building a business here. The problem is that as we tried to work with the government to solve the piracy issue, it forced our pricing to a much lower level. In some cases, it’s even lower than even less affluent markets around the region. So while we have a lot of legalized services, prices of legalized services are quite low. So we have to work double hard to make the same amount of money.

What measures do you think the Korean government should carry out in order to solve the illegal copyright issues?

I think first we have to give credit to the Korean government because laws and actions they put in place have been very effective. I wish more governments around the region would follow the benchmark set by Korea. Can they do more? I think so. It is an industry where we need more encouragement to invest. To invest in new artists and create more opportunities and to create more marketing which would create the next level of development in the Korean music industry.

The government should encourage us to invest more. I think the main focus of legal services is that it’s not a onetime solution. The thing about people who are active in illegal downloading is that they will try to find out every way they can to do it. So it’s an ongoing process where the government needs to be vigilant. The government has to understand they have to keep up-to-date with changes and what pirates are trying to do with proxy servers.

Smartphones are being used a lot by music consumers, do you have any plans to make use of the smartphone industry?

Yes, definitely. My background before I became the president was the senior vice president of digital development. And the main focus was to work out two things. How to use this as a delivery platform and the second thing was how to build relationships with device manufacturers where they can offer free or subsidized music services to consumers. We have had many successful rollouts including the one with Nokia that comes with music. So every time you buy the phone, it comes with one year of free music. So we definitely look at more smartphones as a key platform for the growth of the music industry in the next five to ten years.