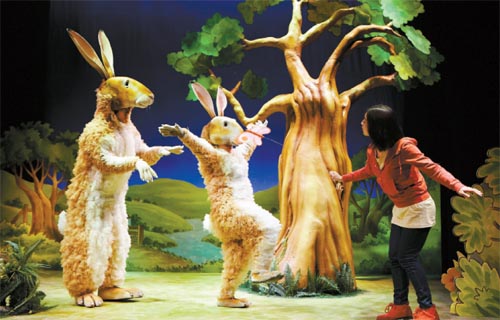 Two rabbits try catching a butterfly with their friend Lucy in the musical “Guess How Much I Love You.” Provided by Theatro


The much beloved bedtime story about two rabbits named Big and Little Nutbrown Hare has captured the imaginations of children since its publication in 1995.

The musical adaptation of the book “Guess How Much I Love You” has been entertaining audiences in Korea since its opening in Daehangno in January and is expected to be a draw in May, which has several family holidays.

The musical is about the love between a father and daughter and tells its tale through songs, games and visually engaging costumes and sets that will keep young minds entertained for the duration of the hour-long show.

The two rabbits are introduced by a human narrator named Lucy who leads the pair on a short hop through the forest. As they go, the seasons change around them and Lucy and Big Nutbrown Hare take turns pointing out the features of each season for Little Nutbrown Hare, who hops happily along. They sing “Spring s for Hopping” as they frolic through a patch of flowers. When the season changes to summer, they splash through a deep blue stream, made from an undulating swath of blue fabric. Fall brings large colorful leaves and in winter they chase after large fluffy snowflakes.

As they go, Big Nutbrown Hare keeps telling his daughter how much he loves her. When Little Nutbrown Hare jumps in and tries to best her dad, the two make a game of it, using the height of a tree and the distance to a hillside to quantify their love.

At last Wednesday’s matinee, the cast didn’t have to work very hard to hold the audience’s attention. The day I saw the show, the kids were eagerly pointing and shouting (at the characters’ invitation) and stayed engaged throughout the production. The adults in the audience, meanwhile, seemed just as entertained as the kids, with some raising their hands to answer questions that were (oops!) originally directed at the kids.

By the end, I felt that I was there not just to see actors on stage, but the performance of the audience as well.

The musical premiered last year in London and was adapted and directed by David Wood, who was honored with the Officer of the Order of the British Empire in 2004 and is known for his musical adaptations of other stories such as “Fantastic Mr. Fox” and “Babe the Sheep Pig.”