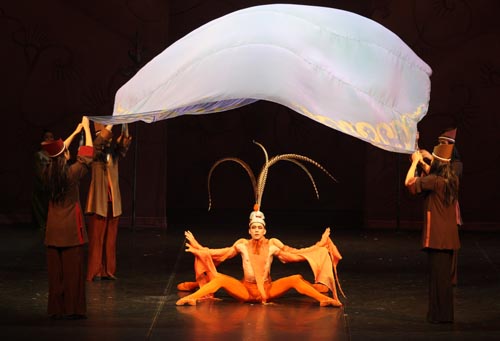 Friday: Korean classical music composer and cellist Unsuk Chin has her first concert in Korea. Chin, who is based in Berlin, was awarded the Grawemeyer Award in 2004 and the Arnold Schonberg Prize in 2005. The program includes the Korean premiere of her Cello Concerto.

The performance will be divided into two parts, with pieces by one to two composers performed in each half. The first half features Chopin and the second features the music of Shubert and Liszt.

Sunday: Popular songs from pop, classical and musical theater are on the program for this concert, organized by the Seoul National Symphony Orchestra and featuring its Seoul Pops Esplanade Orchestra.

The program includes music from movies like “Titanic,” and “Mission”; songs from the musicals “Jekyll & Hyde,” “The Phantom of the Opera,” and “Lion King”; and well-known arias from popular operas, including “Nessun Dorma” from “Turandot” and “Toreador” from “Carmen.”

April 27: Romanian soprano Angela Gheorghiu - two-time winner of the Female Artist of the Year award at the Classical Brit Awards in 2001 and 2010 - will hold her first concert in Korea.

She is joined by tenor Marius Brenciu and conductor Ion Marin.

The program also includes duets such as “O Soave Fanciulla” from Puccini’s “La Boheme” and “Muzica” by George Grigoriu.

April 28: Danish jazz pianist and record producer Niels Lan Doky is coming to Korea to promote his latest album, “Return to Denmark,”
that was released in March last year.

Born to a Danish mother and Vietnamese father, Doky began playing guitar when he was seven and piano at 12. He attended Berklee School of Music in Boston and has performed with some of the biggest names in jazz, including Thad Jones, Joe Henderson and Woody Shaw, among others.

The concert programs includes hits from his latest album - “Farewell Song” and “Return to Denmark,” as well as songs from previous albums.

April 30: Lim Dong-Min is a classical pianist who has won numerous awards from well-known competitions. He won the Chopin Competition for Young Pianists in Moscow at the age of 16 and in 2005 he tied for first at the 15th International Frederic Chopin Piano Competition in Warsaw, Poland.

At this recital, he will be playing pieces such as Chopin’s Nocturne, Op. 55, No. 2, and Barcarole in F sharp Major, Op. 60, as well as Musorgsky’s “Pictures at an Exhibition.”

Friday to Sunday: The Korea National Ballet presents a ballet based on the Korean version of the traditional Romeo and Juliet story, “Prince Hodong.” The story, set in the Goguryeo Dynasty, follows a plot similar to the Shakespearean play and draws on themes such as patriotism, war, love, betrayal and death. The ballet had its world premiere in 2009. Dancers alternate in the leading roles of Princess Nakrang and Prince Hodong.

To Sunday: “Monte Cristo” is a musical retelling of Alexandre Dumas’ 1844 novel “The Count of Monte Cristo.” The story follows Edmond Dantes, an honest sailor who is wrongfully arrested during his engagement party for being a traitor to his country.

To carry out his plan for revenge, Dantes transforms himself into the mysterious and wealthy Count of Monte Cristo.

This story revolves around a mysterious inventor named Dr. Coppelius, who has created a life-sized doll named Coppelia. The doll is so lifelike that she attracts the attention of a town bachelor, Frantz, who is soon to be wed but tries to woo Coppelia instead. When Frantz’s fiancee see him courting Coppelia, she dresses up as the doll to show him just how silly his ambitions are.

The dance was choreographed by James Jeon, who was the artistic director of the Seoul Ballet Theater for 10 years.

To May 29: Cirque du Soleil returns to Korea for the first time in three years with a new production, “Varekei,” which is based on the Greek myth of Icarus. To tell the tale, the world-renowned troupe employs spectacular costumes, intricate sets, a multi-layered soundscape and its usual high flying mixture of circus tricks and acrobatic choreography.

Saturday: An Sur-yeon is a haegeum (fiddle) player and singer who is a member of the National Orchestra of Korea. She will perform hits such as “My Heart is Azure,” “Czardas” and “Amazing Grace.”

The last part is “Venice Glass Fantasia” and shows 60 pieces of glass art by artists Schiavon and Pino Signoretto.