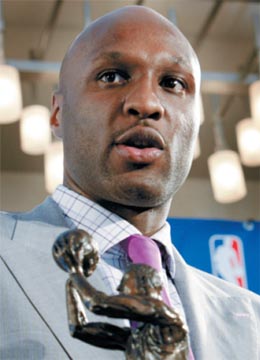 LOS ANGELES - Whether he’s on the court, in the locker room or at home with his reality-TV-star wife, Lamar Odom has evolved into the consummate supporting player.

The Los Angeles Lakers think it’s high time Odom got his own spotlight for being so willing to step back.

“It’s been a long time coming. I just kept at it,” Odom said, accepting the award while Kobe Bryant and Derek Fisher led a round of cheers. “I’ve learned so much from the dudes in the locker room. I’ve just been so blessed to be around you guys.”

Odom was widely expected to be a major hoops star while growing up in Queens. After a disappointing start to an NBA career spent largely on losing teams, he has achieved a unique version of that stardom with the back-to-back champion Lakers.

It all happened in a way Odom never expected: by willingly becoming a sixth man.

“There was a point in my career where people were ready to call me an underachiever,” Odom said. “Winning an award like this is right at those people that were ready to call me an underachiever. There’s still some goals I want to set. I would love to play in an All-Star game, [but] the better I get, the more I can help this team just continue to win.”

Odom averaged 14.4 points, 8.7 rebounds and 3 assists per game this season while playing in every game for the Lakers. He was a starter for long stretches of the season while center Andrew Bynum was sidelined with injuries, but also came off the bench 47 times.

Bryant, Fisher and Pau Gasol were among several Lakers who showed up at a hotel ballroom near the Lakers’ training complex to give a standing ovation to the player widely acknowledged as the most popular guy in the locker room. Odom choked up briefly while thanking his teammates for the award.

Odom is the first Lakers player to win the award, which began in 1983.

He received 96 of 117 first-place votes from the media panel to beat Terry, who finished a distant second with 244 total points to Odom’s 513. Philadelphia’s Thaddeus Young was third with 76 points and Boston’s Glen Davis finished fourth with 75.