Are we prepared for the aging of Korea?

Are we prepared for the aging of Korea? 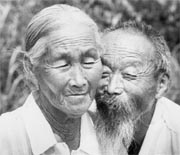 The saying that people seldom live to be 70 is an old saying that no longer seems to apply. Nowadays, people no longer throw grand parties in celebration of their 60th birthday and may even spend their 70th birthday in the same way as all others. In fact, the life expectancy for most women is now 86.5.

Our society, which is on its way to becoming an aging society, will be an aged society by 2018. By 2026, it will become a super-aged society where 20 percent of the population is over 65. Are we ready for that?

We should consider how fast our population is aging. It took 92 years for the United Kingdom to be a super-aged society, 80 years for Germany and 36 years for Japan. But it is expected that it will take Korea only 26 years to reach that milestone. We all need to recognize the seriousness of the present situation and prepare for the future.

As we know, the low birthrate is a problem. Last year, Korea’s birthrate was 1.15. That’s even lower than Japan’s 1.37 and far below the replacement rate of 2.1, meaning that future generations will have to bear the burden of supporting the older generation from the time they are born. Nevertheless, the government’s pro-natal policies are by no means systematic and their effectiveness is doubtful.

Another problem we face is unplanned retirement. Last year, assets put aside for retirement amounted to 200 trillion won ($185 billion), or 17.5 percent of the GDP. For the United States, it was 84 percent, and Japan, 39 percent. In addition to that, the baby-boomer generation that invested all their income in their children is in line to retire. Already, the poverty of the aged has become a serious social problem.

As if that weren’t enough, we also have to contend with child care, education, pensions, medical welfare and re-employment. In April 2006, Japan lengthened its retirement age to 60. And in Korea, 95.4 percent of businesses are cooperating with a government plan that aims to extend retirement to the age of 65 or re-employ retirees by providing them with tax benefits and subsidies. Both measures are part of the government’s attempt to prepare for the aging of Korea.

Long life is a blessing for the nation, society and individuals if one prepares for it - but if not, it is a pain for all. We need comprehensive and systematic measures to prepare for the arrival of the aged society. Korea is aging, and fast.