Despite Middle East unrest, Korean construction firms are expected to reach $70 billion in overseas construction projects this year, a goal set by the Ministry of Land, Transport and Maritime Affairs.

The International Contractors Association of Korea said local companies received $12.66 billion in overseas construction orders in the first quarter, less than half of the record $28 billion from a year earlier.

Companies also received $150 million in orders from Central and South America and $548 million orders from Africa. But total overseas construction orders from Asia outside the Middle East decreased 61 percent to just $2.19 billion, with orders from Europe declining 51 percent to $82 million. The Pacific North American region showed an 11 percent increase at $410 million.

Hanwha E&C is on track with its overseas construction contracts. 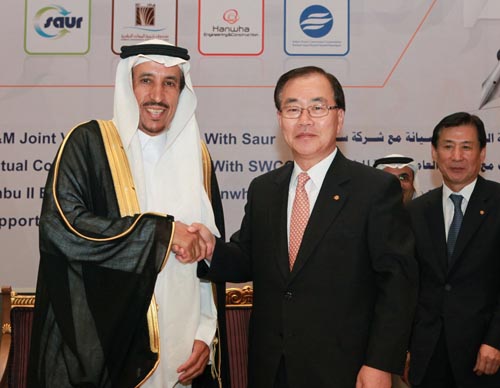 Kim Hyun-chung, vice chairman and CEO of Hanwha E&C (right), and Saud Bin Abdullah, chairman of MARAFIQ, pose for a photo at the ceremony.


Recently, it won a $1.05 billion contract for the Saudi MARAFIQ Yanbu II Power & Water Project. The contract ceremony at the Four Seasons Hotel in Jubail, Saudi Arabia, was attended by Hanwha E&C Vice Chairman and CEO Kim Hyun-chung, MARAFIQ Chairman Saud Bin Abdullah and MARAFIQ President Thamer S. Al-sharhan. To be completed in 2014, the project will be in Yanbu, the country’s largest industrial estate, with 3 units of STG with generating capacity of 230MW, 890 tons of boiler (heavy oil fired type) and a desalination plant built in EPC Turn-Key (a package deal that involves design, procurement and construction) method, providing up to 60,000 tons of water per day.

Hanwha outrivaled domestic and overseas firms with its EPC business performance capacity. Kim Hyun-chung, Hanwha E&C vice chairman and CEO, has stated that the company “believes the ordering organization’s full confidence in Hanwha after we built the Yanbu I Power Plant had a positive effect on their decision-making.”

Kim also said that Hanwha plans to “diversify the types of overseas plant construction based on technical skills and experience accumulated through our Middle East plants and chemical EPC plants.” Indeed, Hanwha looks to make noticeable gains in overseas civil and construction projects.

Hanwha is in the midst of five projects, including $750 million Saudi MARAFIQ Yanbu I Power Plant, oil refinery in Arzew, Algeria ($400 million), and LPG filling plant in Kuwait. Hanwha is getting off on the right start for its overseas business in 2011 with a $220 million chemical plant contract in Kuwait in March.