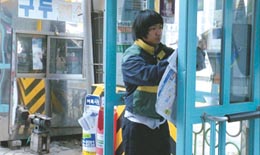 Jeon Seung-chul defected from North to South Korea to find a better life. Although he does all types of menial jobs such as taping up posters on the street, he is armed with a can-do spirit. But he often finds himself being beaten or bullied by his neighbors because of his status as a North Korean defector.

Life is even more difficult because the first three numbers of his citizen identification number, “125,” mark him as a defector, often drawing a sharp line between him and his fellow Koreans.

Things become more complex when he falls in love with a South Koran woman at his church who works at a noraebang (Korean singing room). In order to win her heart, Jeon even lands a job at the same noraebang but the woman asks him not to tell anybody at the church where they work because she believes it is a shameful job for Christians.

Meanwhile, Jeon has to contend with his roommate, fellow defector Kyung-chul, who often steals and cheats on his compatriots. Jeon’s only comfort in his life is an abandoned dog.

Inspired by director Park Jung-bum’s friend Jeon Seung-chul, a North Korean defector who died of stomach cancer at the age of 30, rookie director Park wrote the screenplay and also played the lead role. Even before its official release in Seoul, the film received more than five international film awards. 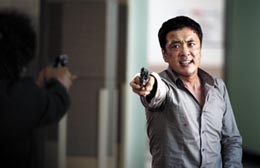 This movie follows a revenge plot that depicts how paternal love drives fathers to go beyond their limits.

Detective Jong-sik (Kim Seung-woo), whose daughter Min-ji (Kim Sae-ron) needs a heart transplant that he can’t afford, receives a bribe to cover up a murder case involving the boss of an organ trafficking organization in order to save his daughter, whose life is hanging by a thread.

But in order to cover up the crime, the detective has to put an innocent man - Sang-man (Son Byung-ho) - in jail. As if that weren’t enough, Sang-man learns in jail that his daughter has died. He vows to take revenge on Jong-sik, and when he gets out of jail he starts putting his plan into action. Meanwhile, Jong-sik has found out that his daughter’s donor is Sang-man’s wife, setting up the final conflict between the two.

The film was directed by Jeon Man-bae, who is also known for directing “The Romantic President” (2002), and features veteran actors like Kim Seung-woo and rising child actress Kim Se-ron, who also starred in “The Man from Nowhere” with actor Won Bin.

If stomach-churning, cringe-worthy stunts and antics are your thing, then why not take in a showing of “Jackass 3D.” The third installment in a franchise that first began as a television show on MTV, “Jackass 3D” continues with its trademark sense of humor and hurt: tying a toy helicopter to someone’s penis, locking yourself in a poo-filled portable toilet as it is thrust around on bungee ropes, sticking a party whistle into someone’s rear-end and blowing it with farts. You get the idea.

Johnny Knoxville, the ringleader, is back with Steve-O and Bam Margera. The three of them also continue to confound and confuse people in their movie, pulling off pranks like having a bunch of little people walk into a bar together.

Directed by Jeff Tremaine, “Jackass 3D” isn’t for the refined, but perhaps it’s why it still seems fun, though slightly tired, after all these years.

A haunting, poignant adaptation of Kazuo Ishiguro’s celebrated 2005 novel, “Never Let Me Go” hews closely to Ishiguro’s trademark tendency to reveal key plot elements in a slow-moving, disturbing manner, until the full scale of the horror confronts you at the end.

Kathy is a “carer” who attends Hailsham, a British boarding school in the countryside, with Tommy and Ruth. The children live normal lives at the school, playing and learning, except for the casual reminders from the adults that they exist in the world to provide organs to dying people. Indeed, they are carefully cloned people for the sole purpose of extending the lives of the sick and elderly in England.

Fast forward to the recent past, when Kathy (Carey Mulligan), Ruth (Keira Knightley) and Tommy (Andrew Garfield from “The Social Network”) are adults. The three of whom are involved in a love triangle of sorts, and it is Kathy’s job to lead people to their eventual deaths - in this case, her two friends.

Directed by Mark Romanek and based on Alex Garland’s screenplay, “Never Let Me Go” is a chilling reminder of life’s finite quality as well as the acceptance of our fates and the duties we are presented with. 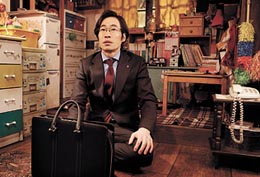 Top insurance agency magnate Byung-woo (Ryoo Seung-bum), who once dreamed of becoming a successful insurance consultant, thought that his life was smooth-sailing - even if it cost someone’s life. But when he is charged with helping one of his customers commit suicide as he tries to build his client list, he is left with only 15 days to cancel all of the unjust contracts he had made with customers in the past.

Some of Byung-woo’s customers include Hong, a depressed manager who is estranged from his wife and children, So-yeon (Younha), a grouchy teenager who is the head of her household, and Bok-sun, a widow and mother of four.

While Byung-woo struggles to keep his customers from ending their own lives, in the process he gradually becomes swayed by their genuine, innocent lives.

Directed by the novice director Jo Jin-mo, film cast not only includes veteran actors such as Ryoo Seung-bum and Sung Dong-il but also singer Younha, who is making her cinematic debut. 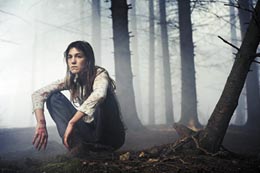 A grieving couple retreat to their cabin in the woods “Eden,” hoping to repair their broken hearts and troubled marriage after the death of their son. What unfolds has had people walking out of cinemas all over the world since its release. The mother’s grief consigns her to a hospital but her husband, a therapist, takes her home and tries to treat her depression. They go to stay at their cabin in the woods, where something untold happened the previous summer. Told in four chapters with a prologue and epilogue, the film details acts of lustful cruelty as the man and woman unfold the darker side of nature outside and within.

Directed by Danish Dogme 95 founder Lars von Trier, the oldest enfant terrible in the business, the film has been called the most shocking movie ever to be shown at Cannes. The four chapters deal with complex themes and the film has been criticized for its violence, particularly an attempted emasculation and a self-inflicted clitoridectomy. One reviewer said “Antichrist is something to be experienced rather than understood.”