How Incheon plans to soar

How Incheon plans to soar 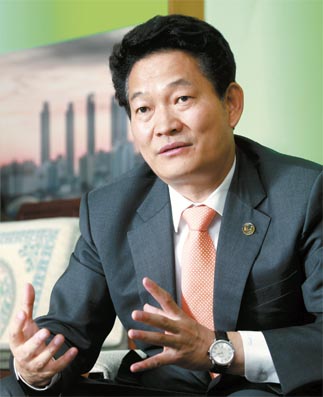 Incheon Mayor Song Young-gil in an interview with the Korea JoongAng Daily on April 14 in his office. By Lee Chan-weon

Incheon Mayor Song Young-gil came into national prominence at a very early age, 21, when he became the first elected student council president of Yonsei University, where he spearheaded the student democracy movement during the Chun Doo Hwan dictatorship.

After college, he gained renown for his work as a lawyer specializing in labor issues and his willingness to work blue collar jobs, as a plumber and laborer, to get closer to the workers he championed.

After going into politics as a National Assembly legislator for Incheon from 2000 to 2010, Song decided to try his hand at administration, winning the Incheon mayoralty last June.

In his first year in office, Song found major success when Samsung decided to base its biopharmaceutical business in the city’s Songdo International Business District, beating out competing cities such as Giheung and Sejong.

Samsung will invest about 330 billion won ($305 million) in its Incheon biopharmaceutical unit through 2020 in cooperation with a leading U.S. pharmaceutical research organization, Quintiles Transnational Corp., and will build a plant to produce cancer and arthritis medicines starting in 2013.

He’s also formed a task force to develop the harbor city into an international hub for the automobile business, with auto plants, used-car export businesses and electronic car projects.

The 48-year-old Song’s overarching ambition is to make Incheon a major zone of international investment for Korea and an alternate to Seoul for expatriates who want to move to the country.

He also wants to prove his chops as an administrator by chopping the city’s 7.7 trillion won budget deficit, which was the result of his predecessor’s big spending on big construction projects and an unsuccessful urban future expo in 2009.

The Korea JoongAng Daily sat down with Song in his Incheon office last week to find out how his big ambitions are playing out. Here are excerpts of the conversation:


Q. After landing the Samsung-led investment in the Songdo International Business District, do you have any more companies planning to invest in Songdo or the other two districts in the free economic zone, Cheongna and Yeongjong?

A. Since the success of attracting Samsung to Songdo, lots of foreign companies are asking for advice on investing there, and I think the real estate market in the Songdo area has been revitalized. A leading U.S. company has recently signed a memorandum of understanding with the Incheon Metropolitan City government in regards to investing in Songdo, which is still confidential.

Furthermore, in the aftermath of the devastating tsunami and earthquake disaster in Japan, we are hoping to lure Japanese automobile component companies to Songdo because they may need some backup facilities to restore their production. We are also surveying and contacting automobile companies in Korea.

Do you support Korea’s free trade agreements with the EU and the United States?

Yes. Since I served as chief of the Korus FTA special committee under the Uri Party, I have supported the agreement.

And after the ratifications of the Korea-U.S. FTA and Korea-EU FTA, I’m thinking of developing the Cheongna International Business District into a hub for the automobile industry, boosting all businesses related to automobiles: building automobile plants, developing the largest used-car market in the world, and research on electronic cars and hydrogen-fueled vehicles. From R&D centers to a used-car market, I will make Incheon a center for all aspects of the automobile business, and an important part of that will be how we take advantage of the free trade agreements coming into effect.

Does that mean you’ll be focusing on developing nonmanufacturing industries in Songdo?

When it comes to manufacturing, a leading Korean pharmaceutical company, Celtrion Inc., has run its business in Songdo for nine years, and the recent Samsung-led biopharmaceutical business will be launched as well.

But the problem is clinical centers, which we haven’t got yet. But lots of U.S. medical centers, such as those at Harvard University and the Johns Hopkins Hospital, have contacted us to discuss building branches in Songdo, even although Incheon hasn’t passed any laws permitting profit-making hospitals in Songdo yet.

Many foreign investors see Incheon as the most suitable place for profit-making hospitals, because of Incheon International Airport and its geographical proximity to Russia and China, where lots of wealthy people live.

Although you have succeeded in attracting international schools to Songdo, how are you planning to persuade skeptical expatriates to invest and live in Incheon rather than Seoul?

Chadwick International School currently has 250 students, and lots of parents and students love the school. When it comes to universities, graduate courses run by the State University of New York at Stony Brook will start this year, and the University of Utah and George Mason University have plans to launch courses in Songdo as well. The University of Kent in Brussels and St. Petersburg University in Russia also agreed to open local branches.

And Severance Hospital has a plan to build an international hospital in Songdo, regardless of whether it will be profit-making or not.

You have talked about the possibility of co-hosting the Asian Games with North Korea.

I think hosting the Asian Games is meaningful in the age of a rising Asia. I am confident about receiving a positive answer from North Korea’s government about the plan, but I don’t think the South Korean government is prepared for it.

And even if the two Koreas can’t co-host the games, it might be possible that players from the two countries can appear at the opening ceremony together or hold some cultural performances together.

You have recently visited Russia. Why you are pursuing a closer relationship with Russia?