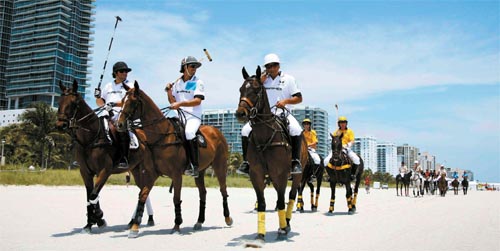 
MIAMI - Think of polo and the words elitist, snobby and even royal might spring to mind, but when the old sport takes place on Miami’s South Beach it is a very different event.

The South Beach setting for the Miami Beach Polo World Cup marks an inevitable break with convention and the result is an event that, at first, had traditionalists shaking their head.

Founder Bruce Orosz got some puzzled reactions, but eventually support, when, seven years ago, he first brought some of the game’s top players and their horses on to the South Florida sands.

“The first year, people were somewhat surprised. They said: ‘Polo on the beach, what? Huh?’ But the traditionalists thought, well Arena Polo has been played at places around the world, this could be really interesting - so they all turned out,” Orosz told Reuters.

While polo tournaments have always been very social occasions, there is a gentile tone to events at traditional clubs, with the gentle sipping of cocktails, elegant but restrained fashion and a generally conservative atmosphere.

When the regulars from the International Polo Club at Wellington, near Palm Beach, made the drive down the coast to Miami Beach, they found something very different.

“I think they were amazed and surprised. They came down from Palm Beach wearing their scarves and jackets and Ascots and then all of a sudden they realized that it was South Beach and there were girls standing on the perimeter in bikinis and other people in shorts and it was a very different kind of experience,” said Orosz.

“To their amazement again, what we did was add another dimension, we turned it into a bit more rock ‘n’ roll, having DJs and musical elements and other surprises that were not typically polo. We tried to rev it up a bit, it was a little rebellious but I’d like to say we modernized it a bit,” he added.

Rather than recoil in horror though, most of the traditionalists accepted that popularizing the sport could only help the game in its normal environment.

John Walsh, presenter of the “America’s Most Wanted” television show and a keen polo player who will compete in the tournament at Miami Beach which starts on Thursday, says the event has been part of a wider growth of the game in the United States.

Walsh, who has played polo across the world, including at the first event in Beijing, acknowledges that the level of interest in the sport cannot match that of the heartland in Argentina, but believes more Americans are educating themselves about the game.

“In the years that I have been playing I’ve seen crowds get bigger, people get more interested, more people figure out the game.”

The appeal of beach polo, for those who love the sport and not only the party scene, is a chance to see the action at close-range on a smaller field with three against three rather than regular four-a-side.

“You get to see polo up close, the sand is flying off the hooves, five feet from the frontline spectators, there is an intimacy, a chance for people to feel the sport and see that it is not only a dynamic sport but incredible athleticism is required, dribbling a ball while they are on a horse going 20 miles per hour,” says Orosz.