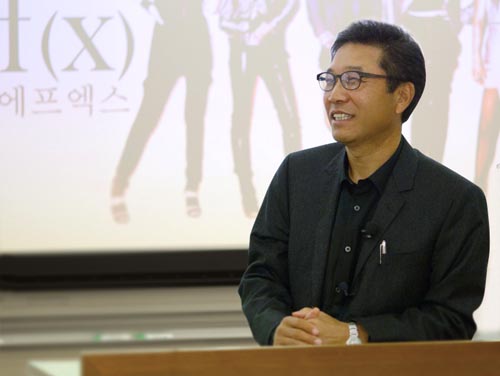 
In Korea, Lee Soo-man, founder and CEO of SM Entertainment, is known as the show business entrepreneur with the Midas touch. From H.O.T. to S.E.S. to Super Junior and Girls’ Generation, Lee has been nurturing the nation’s top K-pop groups since the late 1990s.

Lee, a singer-turned-businessman, is also famous for his fortune. As of last year, Lee’s shares in the company were valued at around 26.2 billion won ($23.6 million), the highest among entertainment personalities, according to Chaebul.com, a local Web site that analyzes the fortunes of prominent figures in Korea.

Outside Korea, however, Lee is more famous as a Hallyu expert, or the Korean Wave. The 59-year-old businessman recently gave a lecture at Stanford University on Tuesday local time. About 100 students from the school’s MBA program flocked to hear Lee speak about SM Entertainment’s global and local business strategies, which are often benchmarked by production companies overseas, especially in Southeast Asian countries.

SM Entertainment is involved in every aspect of training and development of its artists on its roster. It takes budding artists up to 10 years to go through the rigorous system, which can even involve language lessons.

Lee is considered the first person to develop the system, which is now widely used in Korea. The system has opened a new era in K-pop by producing highly trained, triple threat superstars, beginning with the now-defunct H.O.T., a five-member group that made its debut in 1996.

After conquering the Korean market, SM Entertainment moved some of its signers into Japan in 2001, including BoA.

The most recent group to debut there was nine-member Girls’ Generation, whose second single “Gee” reached No. 1 on Japan’s prestigious Oricon Chart.

Lee’s appearance at Stanford was not his first at a foreign university. He lectured at Harvard University from 2006 to 2008 and has also spoken at MIT and Cornell University.

Lee got his start as a singer in the early ’70s and established SM Entertainment in 1995.

As of last year, SM Entertainment reported 86.4 billion won in sales, 39 percent higher than a year ago.