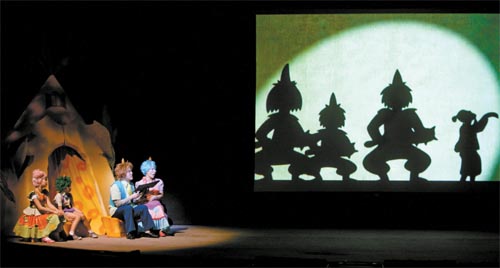 Ggabi (Gang Min-gu), second from right, and his family watch a shadow dance in the show “Traditional Music Bundles with Mother” at the National Theater of Korea. Provided by the theater

The National Gugak Center is gearing up for an encore performance of its musical “A Child Named Oneul,” which premiered in 2008 and has been warmly received each season since.

This year’s production starts on Saturday on runs through Children’s Day on May 5.

The story is based on the folktale “Woncheon River,” which originated on Jeju Island. “Oneul,” which means “today” in Korean, is the name of the main character, a child who is on a journey to find the meaning of life.

In her quest, Oneul sets out for the Woncheon River, the home of the four seasons, hoping they’ll have the answers she seeks.

During her journey, she meets a number of troubled creatures and tries to help them overcome their worries, learning valuable lessons about life along the way.

When she meets a python whose dream is to become a dragon, Oneul learns the importance of working hard to achieve one’s dreams.

Later, she learns the importance of giving and receiving love when she meets Lotus, a flower that can only blossom once in its lifetime but aspires to do more.

In the end, Oneul learns how precious life is and is crowned the goddess of the four seasons. 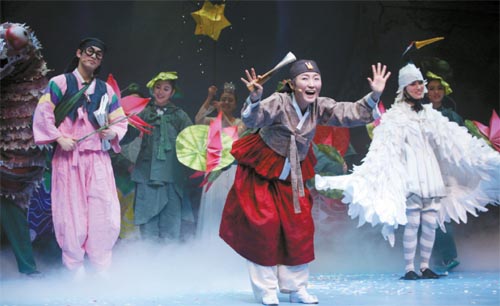 Oneul, center, goes on a quest to find the meaning of life and encounters magical creatures along the way in “A Child Named Oneul.” The show runs from Saturday to May 5 at the National Gugak Center in southern Seoul. Provided by the theater


The play aims to keep young audience members entertained with a host of colorful sets and props.

The moment when the python turns into a dragon is made magical through the technical wizardry of the show’s designers, who make the creature fly over the stage.

After the show, audience members are invited to learn how to make dolls with traditional Korean paper. There is also a photo station where they can take pictures with the performers.

The National Theater of Korea’s production of an audience favorite also starts Saturday. It continues through May 8.

The production, “Traditional Music Bundles with Mother,” has been seen by 58,000 children and their parents since its premiere in 2004.

The show incorporates magic tricks, mime, shadow dances and traditional music and deals with many of the situations that families face in everyday life.

The story is about a little troublemaker named Ggabi, who argues with his family over conflicts at home and at school. Eventually, Ggabi learns how much his behavior hurts his family and vows to do better.

The music is played live by the National Orchestra of Korea.

After the show, orchestra members will give lessons in traditional Korean instruments such as the gayageum (12-stringed zither) and daegeum (flute).

The instruments used in the show will be displayed in the lobby for the duration of the performance run.

“Traditional Music Bundles with Mother” starts Saturday and runs through May 8 at the National Theater of Korea’s Small Hall Dal. The performance starts at 11 a.m. Tuesdays through Fridays and at 2 and 5 p.m. on weekends and holidays. Tickets range from 15,000 won to 30,000 won. Running time is 70 minutes. Children under the age of 3 are not permitted in the theater. To get to the theater, go to Dongguk University Station, line No. 3, exit 6. For more information, call (02) 2280-4115~6 or visit www.ntok.go.kr.