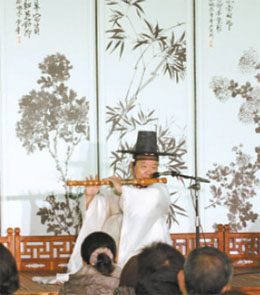 Traditional music and dancing will fill Korea’s historic palaces this spring and summer in the form of a regular series of performances, according to a press release by the Cultural Heritage Administration of Korea.

The first event starts this week at Deoksu Palace. Set against the backdrop of Jeonggwanheon, once used as a recreational villa by Emperor Gojong, “Deoksu Palace Pungryu” features music and dance by some of Korea’s Intangible Cultural Properties. It runs every Thursday until Oct. 6.

Taking the stage this week are several masters of folk singing, including Nam Sang-il and Lee Chun-hee.

Nam is a master of changgeuk, which is similar to Western-style opera. He is a member of the National Changgeuk Company of Korea. Lee is a master of Gyeonggi minyo, a genre similar to pansori (narrative singing).

Royal ancestral ritual music will be performed at Jongmo Shrine on Saturdays from May to June and in September. The shrine is a Unesco World Heritage site.

Details on the performance schedules have not yet been announced.