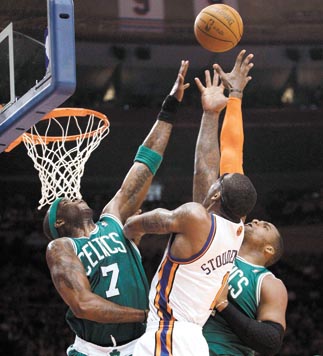 PHILADELPHIA - The Boston Celtics swept the New York Knicks out of the NBA playoffs Sunday but the Philadelphia 76ers denied Miami a seamless move into the Eastern Conference second round.

Kevin Garnett had 26 points and 10 rebounds and Rajon Rondo added 21 points and 12 assists for the Celtics, whose victory at New York’s Madison Square Garden made them the first team to reach the second round of the 2011 postseason.

Ray Allen and reserve Glen Davis each added 14 points for the Celtics, who saw a 23-point lead trimmed to four in the fourth quarter but stretched the margin again thanks largely to Garnett, who scored 20 of his points in the second half.

Amar’e Stoudemire, who has been hindered by back spasms but opted to play after some improvement, finished with 19 points and 12 rebounds.

The Knicks were making their first playoff appearance since 2004, when they were also swept in the first round.The Celtics now have the luxury of waiting for either Miami or Philadelphia.

Lou Williams and Evan Turner each scored 17 points and sparked a game-ending 10-point run that gave Philadelphia an 86-82 victory over the Heat.

The 76ers denied Miami a sweep of the series but the Heat still lead the series three games to one and can advance to the second round with a home victory in game five on Wednesday.

LeBron James scored a game-high 31 points for Miami while Dwyane Wade added 22 and Chris Bosh contributed 12 but the Heat’s superstars fell silent after seizing a 82-76 lead with barely 90 seconds remaining.

“We have been a resilient team all year,” Williams said. “We understand we are outmatched with three superstars but we have heart and will keep playing to the end.”

James sank two free throws to give the Heat a 78-76 lead and Bosh blocked two 76er shots on their next possession.

Elton Brand answered for Philadelphia with a block at the other end but missed after another Bosh block, giving the 76ers eight misses in a row, three of them on shots swatted away by Bosh.

James sank a long jumper over Andre Igoudala, who added 16 points for the 76ers, to give Miami a four-point edge and Wade tipped in a James miss to make it an 82-76 lead.

Turner answered for the 76ers for their first basket in five minutes and 20-year-old Holiday sank a 3-pointer to cut their deficit to 82-81.

After a Wade miss, Williams sank the pivotal 3-pointer for the 76ers with 8.1 seconds remaining, giving him eight points in the fourth quarter and boosting the 76ers to stay at 84-82.

“I wanted the ball in that situation,” Williams said. “Win or lose I wanted it to be on my shot.

Miami was the worst team in the NBA regular season at sinking a tying or go-ahead basket in the final seconds and failed again this time.

James took in the in-bounds pass and drove to the basket but Brand deflected his shot. Turner sank two free throws with 2.1 seconds remaining and James missed a final shot for Miami.