Donald just a round away from No. 1

Donald just a round away from No. 1 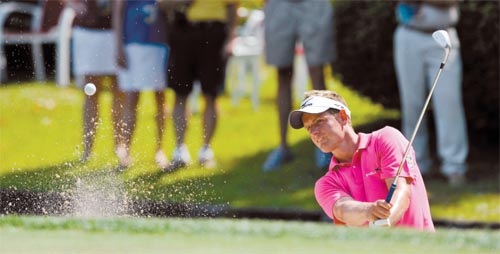 Luke Donald hits out of the bunker during The Heritage golf tournament in Hilton Head Island, S.C., Saturday. [AP/YONHAP]


HILTON HEAD ISLAND, S.C. - Luke Donald was more concerned about who was behind him at The Heritage than what’s ahead should he win Sunday.

Donald shot a 1-under 70 on Saturday to take a one-stroke lead over defending champion Jim Furyk after three rounds at Harbour Town Golf Links. A victory would vault the third-ranked Donald to No. 1.

Donald knows if thinks too much about that, he’ll lose sight of the stellar field trying to chase him down.

“I think there’s a bunch of people behind us that have a good chance, too, so I don’t count anyone else out,” he said. “It should be a good battle out there.”

It usually is with Donald and Furyk.

Furyk, the American ranked 13th in the world, used a par save from the bunker on the 72nd hole to win the Tour Championship by a stroke over Donald last year and claim the $10 million FedEx Cup bonus.

Donald came right back the next week, beating Furyk 1-up in Ryder Cup singles in Europe’s victory.

“I got a little revenge,” he said.

This time the prize for Donald would be two-fold: His first season with multiple wins on the PGA Tour and elevation to No. 1 in the world.

There were seven of the world’s top 20 players here this week, a field strong enough to push Donald past the idle No. 1 Martin Kaymer and No. 2 Lee Westwood.

Westwood would take the top spot with a win at the Indonesian Masters, where he holds a five-stroke lead, should Donald falter.

The two Englishmen exchanged messages about their play.

“Yeah, he sent me a message yesterday just saying, ‘Good playing,’ and I sent one back,” Donald said. “We’re obviously Ryder Cup partners and we’re friends off the course. We never wish bad on each other.”

Donald let a few early nerves show through by hitting his approach to par-5 second hole out of bounds left, leading to a double-bogey 7 that dropped him from the lead.

But Donald steeled himself with two solid par saves on the third and fourth holes when his iron play was shaky. He was in the rough in front of a trap on the par-4 third, yet chipped it up to 6 feet for the par.

Then, Donald was well right of the green on the par-3 fourth. Again, he saved himself with the short game, chipping inside of 2 feet.

Donald regained his momentum on the par-5 fifth with a 12 footer for birdie. “Those up-and-downs and keeping some momentum going where I wasn’t going completely backwards was big for me,” Donald said.

Furyk and Donald will be paired in the final group Sunday for what sets up as a fabulous finish in what might be the final Heritage. A PGA Tour fixture since 1969, the tournament is without a title sponsor, which tour and event leaders say is essential for returning in 2012.