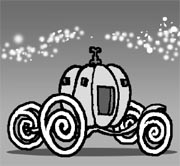 It was a carriage drawn by four horses that took Cinderella, the maid of ashes, to a party thrown by the prince. The fairy tale written by Charles Perrault, in which mice turn into horses and a pumpkin into a carriage, is well-known. “Bibbidi-Bobbidi-Boo,” which has become familiar to us as an advertising jingle in a commercial for a local mobile communications operator, is the incantation the fairy recites when she turns the pumpkin into a carriage in “Cinderella,” the animation film produced by Walt Disney in 1950. In “Swing Shift Cinderella,” a 1945 Tex Avery cartoon, the pumpkin turns into a station wagon, instead of a carriage and Cinderella wears a plunging evening dress. When it strikes midnight, Cinderella rushes home and takes a bus to her factory for the night shift.

In Perrault’s fairy tale, the carriage symbolizes the increase in the social status of Cinderella. The image of a carriage is a luxurious one. The British royal family welcomes state guests with a horse-drawn carriage. When the late President Roh Moo-hyun paid a state visit to the U.K. in 2004, he had the honor of being driven to Buckingham Palace in a horse-drawn carriage together with Queen Elizabeth II. In European royal weddings, the parade of horse-drawn carriages is a tradition. It is equivalent to our tradition of the bride riding in a flower-decorated sedan chair on her wedding day.

Prince William and his fiancee Kate Middleton, who are going to hold the wedding of the century on Friday, will be driven in a horse-drawn carriage to Buckingham Palace after the wedding. The carriage is the State Landau which was built in 1902. The high-quality carriage painted in red was made for the coronation of King Edward VII. But it has no roof. In case of bad weather, a glass coach with a roof will serve instead.

The State Landau was used in the weddings of Prince Charles and the late Princess Diana in 1981 and Prince Andrew and Sarah Ferguson in 1986. Unfortunately, the two couples disgraced the royal family with their divorces.

Since Kate Middleton is a commoner, she is being called “a modern Cinderella.”

In the fairy tale, the golden carriage turned into a pumpkin. I worry that the magic spell being sprinkled on the 21st century Cinderella will also break easily. To prevent it, the British royal family, which has seen the divorces of Prince Charles and Prince Andrew, should recite the incantation “Bibbidi-Bobbidi-Boo” happily.

*The writer is a culture and sports reporter at the JoongAng Ilbo.