Nippert finds an advantage in playing away from home

Nippert finds an advantage in playing away from home 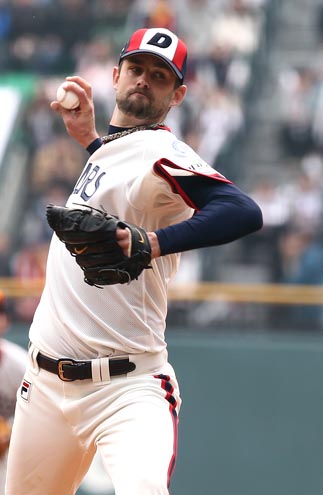 Dustin Nippert throws a pitch during the KBO season opener against the LG Twins at Seoul Jamsil Baseball Stadium on April 2. [JoongAng Ilbo]

This season has been a good one for foreign pitchers in the KBO, who are giving up fewer runs and collecting wins. But none is doing as well as Dustin Nippert of the Doosan Bears, who is currently the league leader in ERA (1.23) and is tied for most wins (3).

For some Bears fans, he is already looking like the next Danny Rios, a former Bears pitcher who captured the league MVP in 2007 with the most wins (22) and lowest ERA (2.07).

Nippert was born in small town in West Virginia but says that he’s from Ohio since he spent most of his early life there.

After graduating from West Virginia University, he was drafted by the Arizona Diamondbacks in the 15th round of the 2002 draft. He eventually made his major league debut in 2005 and was chosen by Baseball America magazine the following year as one of the team’s 10 most promising players. He continued to play with team until 2008, when he was traded to the Texas Rangers for Jose Marte.

Nippert had his ups and downs with the Rangers. He recorded his career high in 2009, with 5 wins, 3 losses and 3.88 ERA in 20 games. He pitched one game in the postseason and was included in the World Series roster last year.

But when the season ended, he suddenly found himself out of a job. He had posted a decent record of 4-5 with 4.88 ERA in 32 games, but the Rangers released him. He said in a recent interview that it came as a surprise but that he took it as an opportunity for a fresh start.

After scouting out his options at home and abroad, he decided that Korea was the right fit. He said it was somewhat difficult at first to acclimate to a new culture and a new language, especially without his family, who initially stayed in the United States. But Nippert says that things are going well. He’s adjusting to his new lifestyle, his family has now joined him and he is playing well.

Last week, the Korea JoongAng Daily sat down with Nippert to talk about baseball and his life in Korea.


Q. Your family arrived here last Monday. How are they doing?

A. They’re well. This is the first time they have been to Korea, and they are still adjusting to the time difference, but I am glad that they’re here. They’re going to stay for the whole season, so I am happy with that.

You have a five-year-old son, Caden. What would you say if he wanted to be a baseball player?

I will support whatever he wants to be in his life. It’s his choice.

So far, you have shown an impressive performance. Why do you think you’re doing so well?

You’re one of the few foreign players in Korea with postseason experience in the MLB. What was that like for you?

It was awesome. It was a great feeling. Playing in the postseason and going to the World Series? Those were good times.

The Texas Rangers released you last year and now you’re with the Bears. What made you decide to play in Korea?

I thought I’d have a chance to play in the MLB again, but the opportunities given to me weren’t good for me. So I had to look for other options through my agent, and then Korea and Japan came up. I just thought that Korea was the better choice. And I’m glad that I made that decision.

Usually, Japan is considered to have a better baseball league than Korea. How did that factor into your decision-making process?

Actually, I didn’t know much about how to compare Japanese and Korean baseball. I didn’t know which league was better and other differences like that. I talked with my family, and I just know that I made the right decision.

How did your family feel about your decision to play in Korea?

They were a bit skeptical at first. They obviously wanted to me to stay in the U.S., but it was a better opportunity to come here and play. Not that many people have a chance to see the other side of the world, but I took that opportunity and I made it work.

When you decided to play in Korea, did you set any goals? For example, getting two-digit wins and a 2.00 ERA?

Yes, I set goals, but I don’t really make them public. I just keep them to myself. As long as the team is doing well, I think I will also have a successful season.

Some critics say that you’re not pitching enough innings. How would you respond to that?

I agree with them. I always try to pitch well and stay on the mound longer. I know I should play more and get deeper into the game, but I also have to follow the coach’s decisions. Every starting pitcher wants to throw a full nine innings and as long as I’m pitching well, I don’t see why I can’t.

On the other hand, critics have praised you for your risk management skills. How would you respond to them?

While I was in the MLB, I mostly pitched from the bullpen. So I’m familiar with what happens when runners are on base. I’d rather first try to keep those runners from getting on base, but if I get myself into trouble, I know I’ve got to get myself out of it. But our defense backs me up a lot.

Are you working on any new pitches these days?

I’m happy with my fastball and curveball, but I’m still working on my changeup. Sometimes it’s good, but sometimes it’s not. I need to be a little bit more consistent with my changeup. Also, this is my first year of learning how to throw a slider.

What would you say is the biggest difference between Korean baseball and the MLB?

The biggest difference for me is the language, which makes it hard for me to communicate with the other players. But if you’re talking about baseball style, Korean hitters foul off of a lot more pitches. They’re good at keeping the bat alive. They’re also disciplined at the plate.

What about the fans?

Korean fans are great. They stay for the whole nine innings whether we’re winning or losing, whereas in the United States if the team is losing, fans sometimes leave early.

If you had to pick one, which Korean player do you think would do well in the MLB?

There are a lot of guys out there, but I think Kim Hyun-soo, our left fielder, would play very good baseball in the MLB. The first baseman for Lotte (Lee Dae-ho) could also play in the MLB.

Foreign pitchers are doing well this season. What are your thoughts on that?

It doesn’t really surprise me that those guys are successful in the league right now. Especially Brian Corey, because he was in the Triple-A in Texas at the same time as I was. He’s a good pitcher.

Do you and the other foreign pitchers get along?

Yes. I mean, there are only a few of us out here. I don’t know all of them, but I try to talk to them and get along. I’m a good guy and I don’t dislike anybody. I can get along with anybody.

What would you say is your biggest strength as a player?

I prepare. I’m always ready before I start a game. I work hard to be on the mound, both physically and mentally.

What are you planning to do in the future?

I’m not thinking about that right now. I mean, last year, I didn’t know that I would be leaving the team, because I thought my job was secure in the MLB, but it wasn’t. This year, I’m just going to think about each day and the season. And when the offseason gets here, I’m just going to see what my options are. I’ll talk to my family and my agent, discuss my options again and see what happens.

What kind of player do you want to be remembered as?

I want people to remember me as a player who didn’t give up, that I was a hard worker, and every time I had a chance, I competed to win and I helped my team to win.