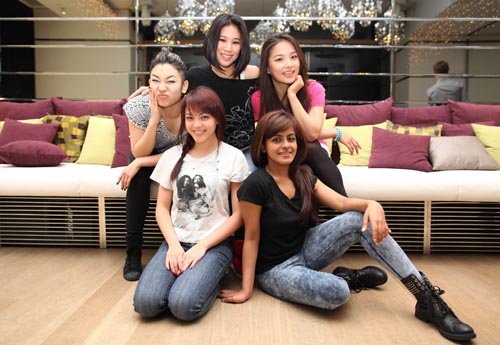 
HONG KONG - They’re a long way from being the next Spice Girls or Pussycat Dolls but five Asian women are hoping to take the world by storm in what is being billed as the first pan-Asian girl band.

“Blush” is made up of five girls from the Philippines, India, China, Japan and Korea who beat hundreds of other pop star wannabes during a talent search across Asia last year.

After surviving weeks of gruelling training and an elimination process, the five are ready to make a big splash on the music scene, both in the East and the West, as they prepare for the release of their first single in May.

“We are hoping we can get global and touch everyone’s heart out there with our music,” Alisha Budhrani from India told AFP in a recent interview as she took a break from dance practice in a Hong Kong studio.

“For us we are really happy that all of our countries can come together through music and we could go out there to show the diversity of Asia, how wonderful it is as a whole.”

“We’ve got real different cultures, languages, dialects and [there are] all kind of crazy things going on in Asia,” said a self-assured Alisha, breaking into laughter with the other four girls, aged between 18 and 28.

The group’s bid for super-stardom may be a long shot but they have been supported by an A-list of Los Angeles-based producers who have worked with top names like Lady Gaga, the Black Eyed Peas and Beyonce.

“Each one of these girls can be a superstar on their own,” Steve Schnur said from his Los Angeles studio through Skype, alongside co-producer Darrell Brown, who has worked with Bon Jovi, Faith Hill and LeAnn Rimes.

Schnur has produced over 150 sound track albums and worked with Florence and The Machine, a British band nominated for best new artist at the Grammy Awards this year.

“Each of them blend together to create something we have never experienced before. It’s not the same old, same old girl band, boy band,” Schnur said.

The girls were in Hong Kong to prepare for their debut album after winning a place in “Project Lotus,” a talent program led by a former Disney executive who wants Blush to be Asia’s music ambassador in the West.

“It started with a very simple question of why there has never been an Asian singer that made it big in the West,” said Project Lotus producer Jon Niermann, the former president of Disney in Asia Pacific.

The latest bid from Asia to try and tap into the key Western market comes after many previous attempts that have fallen flat by Asian artists who first gained fame in their home countries.

The band - named “Blush” to reflect the members’ “feminine, fun, innocent and sweet” side - has recorded six songs so far, mainly pop.