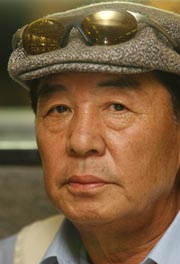 Kim In-moon, renowned for his starring role on the popular TV show “Love on a Jujube Tree” (KBS) died yesterday at the age of 72.

According to the actor’s granddaughter, Kim Eun-kyung, Kim was diagnosed with bladder cancer in April of last year and had been struggling with the disease.

“Only a few days ago did his condition become so exacerbated that our family had to prepare ourselves to say good-bye,” said granddaughter Kim.

Kim had a history of successfully recovering after collapsing in 2005 from a stroke and being told he would be unable to walk. With his passion to act, however, he soon returned to the screen in 2007 by starring in the film “Paradise Murdered”.

The actor made his official debut in the 1967 film “Barefoot Glory” and has acted in many TV shows and films to emerge as one of the nation’s most beloved actors. Kim’s most well known work includes TV shows “Love on a Jujube Tree” (1990), “On the Prairie” (2003) and the film “Let’s Play Dharma” (2003).