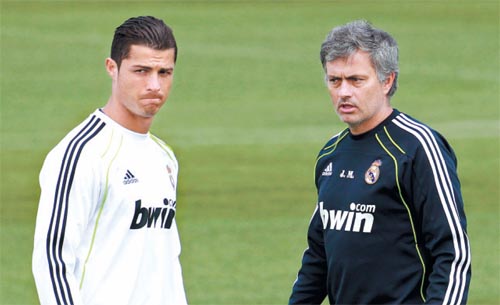 Real coach Jose Mourinho and Cristiano Ronaldo, left, during a training session at the Valdebebas training grounds on April 19. [REUTERS/YONHAP]


MADRID - Jose Mourinho is ready to haunt Barcelona in the Champions League semifinals again on Wednesday, this time with Real Madrid.

Knocking Barca out of Europe’s elite club competition after winning the King’s Cup final against them last week could signal the start of a power-shift in Spanish football away from Catalunya and back to Madrid.

The Portuguese coach has always managed to rile Barca, where he spent some of his formative years as an assistant to Bobby Robson in the 1990s, and guided Inter Milan to victory against them in the semis last year on the way to Champions League glory.

Mourinho also crossed swords with Barca three times during his spell at Chelsea, twice bettering them over a “two-match series.”

His ability to ruffle the Catalan team’s feathers knows no end and he has outwitted them so far in the unprecedented “four-match series” between the world’s two richest clubs.

A 1-1 league draw, when Real came back to level with 10 men on April 16, was followed by last Wednesday’s 1-0 extra-time victory in the King’s Cup final, Mourinho’s first trophy as coach of the Madrid side.

The league title is all but wrapped up for Barcelona but the tantalizing prospect of a 10th European Cup triumph lies ahead for Real, and a third for Mourinho all with different teams.

Barca defender Gerard Pique refused to be drawn on the hot topics of debate after the first two Clasicos such as the quality of the refereeing, the length of the grass at the Bernabeu and Real’s aggressive, “negative” approach.

“The grass is long but I’m not going to cry about it,” the Spanish World Cup winner told daily El Pais of the pitch at Wednesday’s Bernabeu venue. “It’s normal for them to take particular care over their defense and that they try to stop our passing game. Mourinho will use everything available to him.

“At the end of the day they are a powerful team with very good forwards,” added Pique.

Breaking Coach Pep Guardiola’s record of five consecutive Clasico wins, including a 5-0 demolition of Mourinho’s team at the Nou Camp in November, and then winning the King’s Cup has dented Barca’s aura of invincibility.

The two clubs are the competition’s top scorers with 24 goals each but the previous two Clasico have been tense tussles with few sights of goal.

Madrid have packed the centre of the pitch with three holding players led by centre-back turned midfield-enforcer Pepe, ruthlessly denying Barca’s playmakers time and space while looking to break quickly.

Sami Khedira’s injury means Lassana Diarra will probably replace him in midfield while at the back Ricardo Carvalho is suspended but Real’s defensive problems are not as acute as Barca’s.

The absence of Eric Abidal, Adriano Correia and Maxwell mean the returning Carles Puyol could be asked to fill in at left back while midfielder Javier Mascherano could play in defence again.

Any change in Barca’s standard 4-3-3 formation would probably be read as an acknowledgement that Real have worked out the way to play against Guardiola’s three magicians: Xavi, Iniesta and Messi.