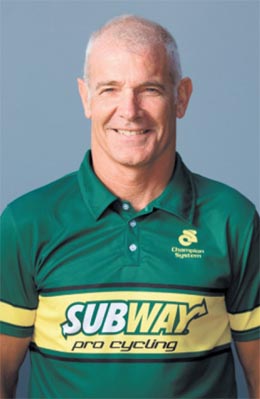 Graeme Miller first started cycling when he was 13. Five years later, he found himself representing his country. Since then, he has won more than 200 races in his career, mostly on the professional circuit in the United States. The 51-year-old also collected two gold medals and two silver medals from five Commonwealth Games between 1982 and 1998, the last of which was particularly special for Miller as he was the New Zealand team captain and flag bearer.

In addition, Miller has competed in four Olympic Games in his 30-year career. One of the highlights of his long career came at the 1988 Olympics in Seoul when he finished eighth in the men’s road race. It was his career best finish in the Olympics.

Twenty-three years later, Miller was back in Seoul on Sunday for the last stage of the Tour de Korea. His memories of the nation’s capital were still intact, but Seoul was not the same city he remembered.

Unlike 1988, Miller is going back home with a prize after he successfully led the Subway cycling team to win the sprint title of the Tour de Korea, helping Paul Odlin to keep the blue jersey throughout the 10-day race.

It was a big achievement for the team, especially as their victory, and in particular that of Christchurch native Odlin, might give some inspirational relief to people back home in the city still reeling from the earthquake that hit in February this year.

The Tour de Korea ended on Sunday, but for Miller, the tournament is another good memory when he thinks about Korea. He said he would love to visit again next year with his team for the tournament.

Before going back to his ordinary life as a real estate agent in New Zealand, the Korea JoongAng Daily sat down with Miller to talk about his experience of the Tour de Korea and Korean cycling.


Q. You competed in the 1988 Olympics. Do you still remember that time?

A. Yes. I was here a short time for the Olympics. Two days before the main event and one day after the race and I had a great result.

There has been a massive change. Back then it was like an Asian city, but now it feels a little bit more like Europe. It’s a fantastic city to get around.

What are your overall thoughts on the Tour de Korea?

It is a fantastic race. To hold a race which goes right around the county is logistically not an easy thing to do. I know people want to make the Tour de Korea into a more professional race and to do that, they should be little bit more organized, but we are very happy to be invited and it’s a great race. There were beautiful roads and we enjoyed so much of Korea. I feel lucky to have seen some of it.

What about officials and volunteers in the tournament?

We rely heavily on the translator when we are not in an English-speaking country and having good translators and them knowing exactly what is going on is important. I think they did a very good job.

Had you heard anything about Korean cycling before?

Because I have been here before for the Olympics and I have done the Tour de Langkawi many times, I have seen some Korean teams and there is a lot of talent here. It looks like from the race there are very good hill climbers and good stage riders, too, and I think that’s because there are a lot races in all the Asian countries now. For example, Hong Kong won the race here. You would have never thought about Hong Kong winning the race 10 years ago.

If you had a chance to coach a Korean cycling team, would you do it?

I would. I would do it happily. I enjoy passing on my experience. Ideally, my perfect job in life would be to coach people. Especially cyclists from Korea, Malaysia or other countries that have a lot of talent but need to be directed in the right direction.

What is the most important thing that a cyclist should have?

I think it’s more that you are always learning. In my 30 years of racing, I made lots of mistakes, but I’ve learned from my mistakes.

Are you going to participate in the Tour de Korea next year?

I would love to come back. It’s always easier to prepare and do well in the race the second time around, because you know where you are coming back to. Now we know what the race is like, we can perform much better next year.

Any final words on Korean cycling?

I saw a little bit of [the amateur] racing. I think if people keep their focus and training up a lot, Korean cyclists are going to have a big future. I think it’s going to be a country to be reckoned with. Maybe in the next 10 or 20 years, if they get good coaching and good management, they could be a force to be reckoned with.