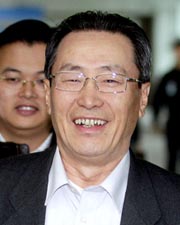 China’s top nuclear envoy said yesterday in Seoul that inter-Korean talks should be held first before the six-party talks are resumed.

Wu Dawei said a Pyongyang-Washington meeting would also precede the resumption of the multinational talks.

Wu suggested the so-called three-stage process for the revival of the six-way negotiation on the North’s denuclearization to North Korean envoy Kim Kye-gwan two weeks ago but it was the first time Wu delivered China’s stance directly to Seoul.

“We hope that the South-North talks that the Republic of Korea wants would be held as soon as possible and we support it,” Wu told reporters after a meeting with his South Korean counterpart Wi Sung-lac.

“We hope that North Korea and the U.S. would hold talks with each other at an appropriate time and that [the resumption of] the six-party talks would be realized through them,” Wu said.

South Korea has wanted to have inter-Korean nuclear talks before agreeing upon the restart of the six-party talks to verify North Korea’s sincerity. The North is blamed for the deadly provocations against the South last year including the shelling of Yeonpyeong Island and sinking the warship Cheonan.

“We are yet to be at a point where we can say there has been agreement that [inter-Korean talks] should produce a meaningful outcome but there is a common ground that [the talks] should not be just formalities,” the official said.

The official said Wu briefed Wi about the three-step process for resumption of the six-party talks and other outcomes of the Wu-Kim meeting, without articulating what the other outcomes were. Wu’s four-day visit to Seoul, which started yesterday, came amid growing optimism over the restart of the six-party talks triggered by a flurry of diplomatic efforts to engage the North.

Upon arriving at Incheon International Airport, Wu said his visit to Seoul is aimed at working out remaining differences between Seoul and Beijing over the issue. “I came here to coordinate the stances of the Republic of Korea and China regarding the situation of the Korean Peninsula and the six-party talks,” Wu said.