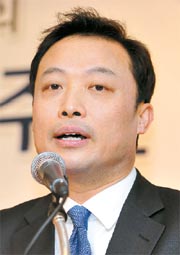 Kwak Seung-jun, chairman of the Presidential Council for Future and Vision, set off a political firestorm yesterday when he said that the National Pension Service and other public funds should use their equity stakes in major business groups to carry out corporate reforms.

Business groups have described such proposals as “pension fund socialism,” while the Blue House yesterday distanced itself from Kwak’s remarks.

But Jun Kwang-woo, NPS chairman and chief executive, appeared to support Kwak’s stance when he recently told the Korea JoongAng Daily and the JoongAng Ilbo that he believed that the $299 billion state pension fund should play in promoting better corporate transparency.

During a policy forum held at the Lotte Hotel in central Seoul, Kwak said, “Public funds like the NPS should exercise their rights as shareholders as a means to reinforce the market functions and curb the power of the large conglomerates.”

“An effective way to encourage shared growth [between small and big business] and prevent the excessive expansion of large conglomerates is the ability of the public funds to exercise their shareholder rights rather than the government’s direct intervention,” he explained.

The NPS is the world’s fourth largest pension fund and it expects its assets could grow to 2,500 trillion won by 2043.

It hold stakes of more than 5 percent in 139 large companies after investing 55 trillion won, or 17 percent of its assets portfolio, in the stock market as of the end of last year.

However, Jun said he was cautious about the NPS directly intervening in corporate management decisions.

At the forum, Kwak criticized the performance of the large conglomerates. He said that “in the case of Samsung Electronics, for example, it seemed embarrassed over the iPhone shock because it had been complacent about the existing mobile phone market even though the coming of the smartphone era had been predicted for several years.”

He pointed out that corporate groups Posco and KT have a diversified ownership structure that it makes it difficult to supervise management.

The Blue House said it had not discussed the issue with Kwak and there was no decision on whether to implement his recommendation.

“What Kwak said reflects his academic background,” said Kim Hee-jung, the presidential spokeswoman. “It is not a policy that had been coordinated with the Blue House.”

She added that Kwak’s remarks may reflect “the presidential council’s position. There is a difference between a government ministry and a presidential council. Ministries announce policies that have already been decided, but advisory councils present various opinions and initiate discussions.”

Nonetheless, Kwak’s remarks have attracted attention since he is a top adviser to President Lee. The Presidential Council for Future and Vision is meant to provide ideas for the future direction of Korea’s development.

The FKI said any attempt to intervene in corporate management for political purposes could “lead to a drop in corporate value.”

“The management structures of local conglomerates such as Samsung will never change unless they happen to go out of business,” said an official from the Financial Services Commission. He suggested there was a need for more ways to promote corporate reforms and transparency, including the use of shareholder rights that could be wielded by the NPS and other public funds.