Comments made by Carter stir consternation

Comments made by Carter stir consternation 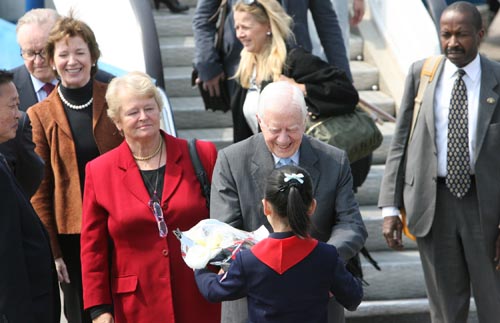 Former U.S. President Jimmy Carter, center, arrives at Pyongyang airport yesterday. Carter is in Pyongyang for a three-day visit in an effort to ease tensions on the Korean Peninsula. [XINHUA/YONHAP]


Former U.S. President Jimmy Carter and his three fellow Elders arrived in Pyongyang yesterday to speak with North Korean officials on bettering relations with South Korea and the country’s lack of food.

But before his departure from Beijing, Carter raised heckles in Seoul by saying the food crisis in North Korea was due to the lack of aid being donated, seemingly referring to South Korea, which stopped large-scale food aid to the North last May.

“I don’t believe it is right to say whether Carter’s statement was right or wrong,” said an official from the Ministry of Unification yesterday.

“But the South Korean government is looking into the [North’s food situation] with much interest. We are concerned about the needy and this is why we recently decided on the resumption of aid to North Korea from private South Korean groups.”

The official explained that resumption of large amounts of aid “would not only be of a humanitarian nature” but would have to be considered in light of “other issues.”

Seoul has demanded that North Korea show “sincerity” and apologize for two military attacks last year in order for the South Korean government to consider its food needs or to have bilateral talks.

“The severity of the food crisis in North Korea isn’t a result of whether foreign countries aided the North or not,” the official said, “but the lack of effort made to better the situation, despite continued failures in policies that have led to this humanitarian crisis.”

“There is no need for North Korea to talk with us through a third party,” South Korean Foreign Minister Kim Sung-hwan said during a press briefing yesterday.

South Korean analysts said that Carter’s visit will allow the Obama administration to show progress in East Asian affairs, although the U.S. government insists that Carter is traveling as a private citizen.

“The U.S. wants to show some progress [in North Korean issues],” said Lee Cho-won, director of the Research Institute for National Unification at Chung Ang University in Seoul. “Obama wants to be re-elected and even if Carter’s visit is supposed to be a private one, he is carrying the intentions of the U.S. administration with him.

“The U.S. will want to have some progress regarding the six-party talks through Carter and there is a need to send a message to North Korea,” said Lee.

Carter was expected to meet North Korean leader Kim Jong-il on this trip. “Wouldn’t a meeting be part of their agenda?” Lee said, “since [Carter] has been given the role of sending a message from the U.S.”