Fury over insider withdrawals at bank in Busan

Fury over insider withdrawals at bank in Busan 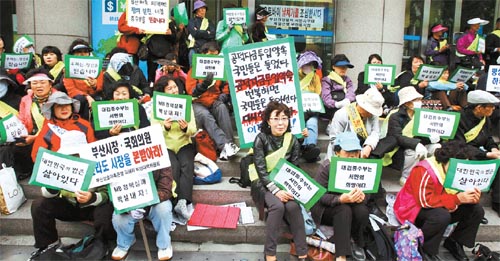 About 200 customers of Busan Savings Bank rally in front of the local office of the Financial Supervisory Service yesterday. [NEWSIS]


Over 200 customers of Busan Savings Bank protested in front of the local office of the Financial Supervisory Service yesterday demanding punishment for executives and employees who secretly arranged massive withdrawals of deposits for around 230 VIPs, family members and employees the day before the bank was suspended on Feb. 17.

“This case must be thoroughly investigated, and [the government] must track down the officials involved in the case and make them take responsibility,” said Kim Ok-ju, head of an emergency committee representing Busan Savings Bank customers. “Ordinary customers who believed in the government’s measures and patiently waited became the victims.”

Kim argued that financial authorities knew of the massive, secret withdrawals of deposits by or for hundreds of VIP clients and family members of bank employees and didn’t take any action to block the withdrawals.

“Speculation about illegal withdrawals came up soon after the bank was suspended, and we requested the police to investigate but we were ignored,” Kim said.

After the suspension, more than 300,000 customers had their accounts frozen, and around 10,000 customers may lose deposits above the guaranteed insured amount of 50 million won ($46,144).

The night before the suspension took effect, withdrawals of around 16.4 billion won were made from Busan Savings Bank.

According to the Financial Supervisory Service, it sent an order to the bank at 6:50 p.m. on Feb. 16 to stop its employees from withdrawing clients’ deposits without going through proper procedures like real-name authorization.

But the bank ignored the warning, and some branches continued withdrawing clients’ money until 10 p.m.

“An employee withdrawing clients’ deposits outside the personal certification process is a violation of the real-name financial transaction system, and he can be charged with misappropriation,” said an official at the Financial Supervisory Service.

The central investigation unit of the Supreme Prosecutors’ Office yesterday launched a probe into the withdrawals.

Prosecutors questioned bank officials as to whether they informed their clients that their bank would be suspended and whether they withdrew deposits for clients.

Any bank officials found to have leaked the news about the bank’s suspension will be charged with revealing inside information, according to the prosecutors.

After scrutinizing a list of clients and withdrawals on Feb. 16 obtained from financial authorities, prosecutors said a total of 107.7 billion won was withdrawn from Busan Savings Bank and six affiliated banks, including Busan II Savings Bank, Jeonju Savings Bank and Daejeon Mutual.

Prosecutors said they already obtained evidence that some bank executives and officials at the financial authority contacted clients or friends and told them to withdraw money.

President Lee Myung-bak, who was briefed about the Busan Savings Bank case in a cabinet meeting yesterday, called for a thorough investigation into moral hazard at the savings bank.