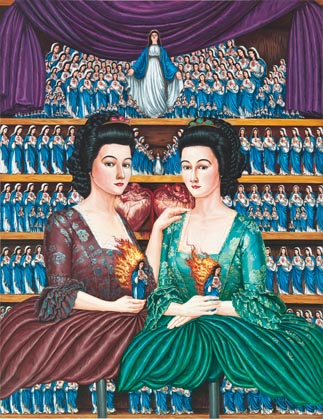 “The specific objects being rearranged in Eunjin Kim’s work are by no means logical or descriptive,” art critic Koh Dong-yeon wrote in his review of the exhibition.

“By regularly including ginseng, dolls, strange female figures and human body parts in her works, the artist achieves her own kind of iconography.”

Kim’s paintings are now featured at 16 bungee, the alternative gallery space of Gallery Hyundai, in Samcheong-dong, central Seoul. By placing objects in an out-of-context environment, Kim said she sought to express her desire to escape the chaos in her life, which she believes comes from the multiple roles and identities she has taken on over the years.

“As a woman, mother, religious person and contemporary artist living in a conservative, male-dominated society, I carry a heavy weight on my shoulders and find it very difficult to live a harmonious life,” the artist wrote in a forward to the exhibition catalog. 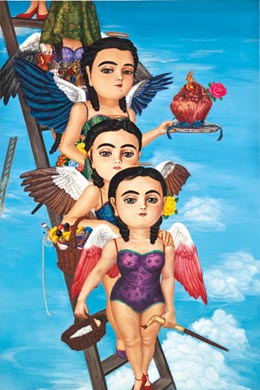 In one painting that is part of Kim’s “Love Affairs” series, two women with Asian facial features wearing Rococo-era dresses are shown holding little Virgin Mary statues that are in flames. But it is difficult to categorize the women according to race, age or even gender, as their faces, clothing, poses and bodies don’t seem to match an exact type. With this, it feels as though the artist deliberately tried to blur the distinction between the figures’ exteriors and interiors.

At times, the artist uses comic relief to express her own agony when faced with the “female” roles that are required by society.

In another painting that is hung a few feet away, the same two women stand in the exact same spot and pose as in the previous painting.

This time, however, they are naked and standing in front of a burning pile of books and they are drawn much smaller in scale compared to the previous painting of them. Surrounding them are shelves holding human hearts that bleed red pearl beads. With this eerie change in background and size, the two women’s erect, formal poses look almost comical and irrelevant in the face of the randomness of the objects that surround them.

And in another painting in Kim’s “Love Affairs” series, a large group of couples wearing traditional hanbok dance in a circle holding hands. In the center stands a cannon shooting babies out into the field. The tension within this painting, where the traditionally-dressed couples and their orderly dance collide with the atrocity of the “baby bomb,” creates a comic yet thought-provoking image for viewers.

“My effort to fight back and overcome the wide gap between the life society demands of me and the way I feel about myself was the main motive for these works,” the artist wrote.

*“Somewhat Somewhere” by Eunjin Kim runs until May 22 at 16 bungee in Samcheong-dong, central Seoul. The gallery is located near Anguk Station, line No. 3, exit 1. Admission is free. Gallery hours are from 10 a.m. to 6 p.m. every Tuesday through Sunday. For more information, call (02) 2287-3516 or visit www.16bungee.com.