Lawmakers from U.S. in Seoul for talks on FTA

Lawmakers from U.S. in Seoul for talks on FTA 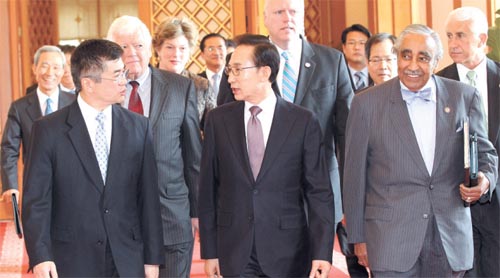 U.S. Commerce Secretary Gary Locke, left, President Lee Myung-bak, center, and Representative Charles Rangel (D-NY), right, walk in the Blue House, along with other senior officials, for a discussion on passage of the Korea-U.S. free trade agreement. A bipartisan congressional delegation, led by Locke, is visiting Korea this week. [YONHAP]


President Lee Myung-bak yesterday made a push to a visiting bipartisan congressional delegation, led by U.S. Commerce Secretary Gary Locke, to ratify the Korea-U.S. free trade agreement, stressing that the pact would upgrade the two countries’ alliance to a new level.

According to the Blue House, the bilateral relations, particularly efforts to build support for the passage of the FTA by the two countries’ legislatures, were discussed during the meeting. Trade Minister Kim Jong-hoon, National Security Adviser Chun Young-woo and Senior Secretary for Economic Affairs Kim Dae-ki and Kim Tae-hyo, Lee’s secretary for national strategy, accompanied the president.

“Today, the Korea-U.S. alliance is stronger than ever and the bilateral economic and trade relations are developing steadily,” Lee was quoted as saying. “We need continuous attention and cooperation to improve the alliance to the next level in terms of both quality and quantity.”

Lee also highlighted the enormous economic and strategic benefits that the FTA will bring to both countries, urging the U.S. Congress to ratify it as soon as possible so that the two countries’ people and companies will enjoy them, the Blue House said.

The Blue House said Locke spoke positively about the prospect, explaining that bipartisan support for the pact has been built in the U.S. Congress through additional negotiations that took place in December. He also promised the best efforts for an early passage, hoping for a smooth ratification process in Korea as well, the Blue House said.

The U.S. Commerce Department said last week that the FTA’s passage is “an important part of President Barack Obama’s National Export Initiative and his vision for the United States to out-innovate, out-educate and out-build its global competition and win the future.”

The department has also said the congressional members will be shown how the FTA will support job creation in the United States and spur economic growth in both countries. “The trip will help the members communicate the importance of Korus to their congressional colleagues and the American public,” it said. Korus is short for the Korea-U.S. Free Trade Agreement.

After signing the FTA in 2007, Seoul and Washington concluded additional negotiations in December to meet U.S. concerns over auto trade, the biggest hurdle to approval. Calling the pact “the United States most commercially significant trade agreement in more than 16 years,” the U.S. government has stepped up its pressure on Congress to ratify the deal. The Obama administration earlier vowed to clear the free trade deal with Korea through Congress before July 1.