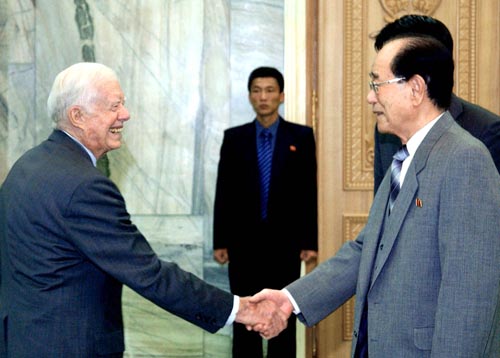 Former U.S. President Jimmy Carter, left, meets Kim Yong-nam, North Korea’s nominal head of state, in Pyongyang yesterday during a visit aimed at easing regional tension. Carter and three other retired world leaders met parliamentary chief Kim at his office in the legislature, the North’s official KCNA said in a brief report. Carter delivered gifts for leader Kim Jong-il, it said, but there was no word whether the visitors would meet Kim or his heir apparent and son Kim Jong-un. [YONHAP]