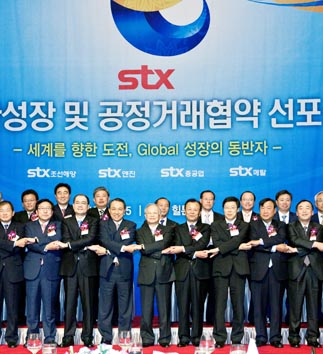 STX Group officials and representatives of suppliers sign an agreement on fair trade and co-development.

STX Group was founded in 2001, and from its beginnings it has had a management style that fosters co-development with its arms and with its small and medium business partners. The company’s model, its executives say proudly, takes as much interest in its social responsibilities as in its business results.

Last October, STX held a ceremony to mark the start of formal co-development and fair trade policies among its subsidiaries - STX Offshore and Shipbuilding, STX Engine, STX Heavy Industries and STX Metal - and 506 of its subcontractors. The program’s goals are to increase financial support of suppliers, improve the subcontractor payment system, help in creating new business opportunities for the small companies, an expansion of technological support and education in competitiveness issues. Its overall goal, the group leaders say, is to prove that its suppliers are true development partners.

Kang Duk-Soo, the chairman of STX, said, “We are proud that in the shipping industries we have made many efforts to become a model in “win-win” cooperation. Together with its subcontractors, STX will go down roads that no other has set foot on, and continue to challenge the world for new markets with its partners.”

STX Group’s cooperative system, called “STX Members,” combined all subcontractor management systems formerly run by each of its subsidiaries. The group recognizes that small companies are limited in the data they can acquire individually, such as raw material prices, so it provides that data to its “STX Members.” That program has been running for more than three years, and STX credits it with generating business worth over 2 billion won as well as lowering costs, raising quality and improving compliance with deadlines. As of last month, there were 87 companies in the program.

In addition, STX supports an R&D fund for localization and new product development. STX also adds its weight to marketing efforts for new products developed by its partners, especially for ships’ equipment.

STX also helps with financial problems. Including contributions by STX Offshore and Shipbuilding and the large shipping companies of Gyeongsang Province, it will provide 40 billion won in a special financial fund to help small and medium shipping subcontractors. In addition, STX has its own network loan system that supports its subcontractors financially. Those loans are available for up to one-sixth of the funding that the Industrial Bank of Korea says a project will need.