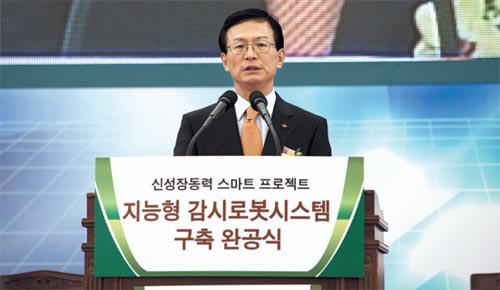 Kang Young-won, KNOC’s president, speaks at a ceremony in July 2010 marking the installation of a robot monitoring system at a KNOC oil storage facility.


Under its new “Great KNOC 3020” strategy, Korea National Oil Corporation aims to be a globally competitive oil company with a capacity to produce 300 thousand barrels of oil per day and with reserves of 2 billion barrels by next year.

KNOC acquired Ankor of the United States in 2008, SAVIA PERU of Peru, Harvest of Canada and Sumbe of Kazakhstan in 2009; in a first for a Korean public company, it also succeeded in a hostile takeover of Britain’s Dana. That latter acquisition alone increased the company’s oil and gas holdings by almost 10 percent.

Korea National Oil Corporation is also working on co-development projects including stocking oil with its small and medium business partners.

To implement those “win-win” projects, now has separate departments for the purpose. In order to expand the co-development culture within the company itself, it has announced that employee performance ratings will include an assessment of cooperation with the company’s efforts to support its junior partners.

KNOC also wants to beef up its partners’ abilities. The company is working on localization of goods and services with them. Two years ago, it helped a subcontractor develop a locally made oil pump cooler, resulting in savings estimated at about $900 million. Last year, ten additional items were added to that localization list.

In addition to strengthening cooperative relationships between KNOC and smaller companies, the company has succeeded in securing local technology and it also plans to hear more opinions from its partners. The main incentive the company has used is a lengthening of contract terms in response to high quality and competitive prices, thus giving top performers more stability in markets and revenues. As a result, KNOC was recognized in December of last year as tops in the field of results sharing and co-development.

One of the company’s longer-term projects is an effort to improve the competitiveness of Korean companies in the oil development services business. Process of oil development includes exploration, test drilling and data analysis and business assessments, but a lack of domestic expertise means that foreign companies share such business for Korea’s big oil companies. KNOC hopes to help change that.

Because KNOC has aggressively bought energy and raw material resources and has also bought several oil development companies since 2008, its debt has increased by 3.7 trillion won.

In this regard, KNOC says it will minimize the risks by introducing an Enterprise Risk Management system to watch the financial health of the company in real time.

The financial concerns are lessened, though, because the additional debt is quickly producing additional revenue. And since it is inevitable that there be an increase in loans while enlarging its business, Korea National Oil Corporation is seeking ways to minimize the financial risks.