Gifts with a social message

Gifts with a social message 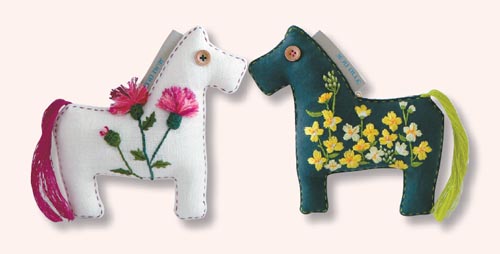 Gansae horses are the mascots of Jeju Island’s Olle walking trails that encourage people to slow down and appreciate life. Provided by the Jeju Olle Organization


Chock full of holidays, the month of May is not kind on the wallet. Of the many special days this month, including Children’s Day, Parents’ Day, Teachers’ Day and even Married Couple’s Day, Children’s Day is the first red-letter holiday on the calendar.

Children’s Day was created by Korean children’s literature author Bang Jung-hwan (1899-1931) in 1927 as a way to promote love and respect for children. Some say that every day is Children’s Day for Korean children these days, because children are pampered throughout the year, but giving gifts on Children’s Day is still a yearly ritual for many parents, grandparents, aunts and uncles.

This year, however, some nonprofit organizations are encouraging families to not only honor their children on this day, but also teach them about social issues by purchasing stuffed animals whose proceeds will go toward a good cause.

Jeju, Korea’s biggest island and one of the country’s most popular getaways, is famous for many things, including haenyeo (or women divers), tangerines and the ubiquitous stone statues known as dol hareubang (stone grandfathers). Now, the island can add one more item to that list - a pony-shaped figure known as gansae.

Gansae horses are an island tradition, usually made with fabric from used clothes.

Today, the gansae horse is the mascot of the Jeju Olle walking trails. In the Jeju dialect, gansae means “laziness” and an “olle” was originally a narrow path leading to a house but is now recognized as a network of walking trails on the island.

“The spirit of the Jeju Olle trails is one of unhurried calm,” said Kim Min-jung from the Jeju Olle Organization, adding that aside from distribution and labor costs, the rest of the money goes toward developing the Olle walking trails.

Since the gansae horses are made of used clothes, each one is different in appearance. They are available at the trailheads of all 16 Olle walking trails on the island. In Seoul, they can be found at local cosmetics shop Innisfree in Gangnam, southern Seoul. Each one costs 15,000 won ($13.60). 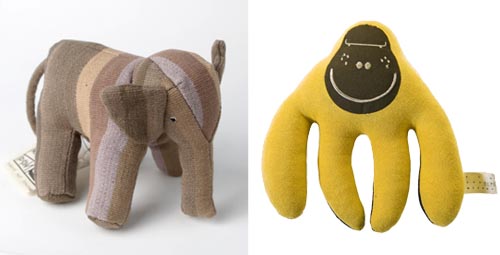 An elephant, above, made by the Women’s Skills Development Project in Pokhara, Nepal, and Mr. Rilla are popular with socially conscious shoppers. Provided by Fair Trade Korea Gru and Eco Party Mearry

These stuffed animals are handmade by members of the Women’s Skills Development Project in Pokhara, Nepal. The fabrics are hand-dyed cotton and woven on a traditional loom, and each stuffed animal has its own unique look.

“Fabric woven on a loom is very tight-knit and durable,” said Min Ji-hye of Fair Trade Korea Gru, which helped bring the toys to Korea. “Compared to other stuffed animals, the ones made by the Women’s Skills Development Project have a lower chance of hair loss, meaning they are good for babies who like to chew things.”

Each stuffed animal costs 28,000 won and is available at the Web site of the Fair Trade Korea Gru at www.fairtradegru.com.

Mr. Rilla is a stuffed gorilla that is popular among environmentally and socially conscious shoppers because it is made with used clothes and the sales proceeds go to charity.

The stuffed toy is made by eco-friendly goods manufacturer Eco Party Mearry, established in 2007. A year later, the stuffed gorilla had become one of the company’s best-selling items.

Although the stuffed animals are made with humble materials, it doesn’t mean that they are poor in design.

Mr. Rilla and some of the company’s other products were exhibited at the Museum of Modern Art, or MOMA, in New York in 2009.

Aside from Mr. Rilla, the company also produces other products from recycled materials. Abandoned sofas are turned into stylish leather bags, and piles of newspapers turn into dozens of pencils.

The company is run by the Beautiful Foundation and its best-known project is the Beautiful Store, a nationwide chain that sells secondhand clothing and everyday items.

A small Mr. Rilla costs 10,000 won, and a medium-sized one is 15,000 won. The proceeds go to the nonprofit Beautiful Foundation. The toys can be purchased in the store or online at www.mearry.com. Eco Party Mearry’s flagship store is on the second floor of Dukwon Gallery in Insa-dong. Anguk Station, line No. 3, exit 6. For more, call (02) 720-9005 or visit the Web site. 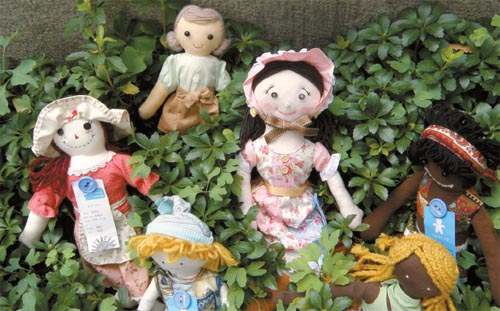 Awoo dolls are made by willing shoppers and “adopted” by new “parents” through Unicef Korea’s Awoo project, which benefits underprivileged children in developing countries. Provided by Unicef Korea

Through Unicef Korea’s Awoo project, socially responsible shoppers can help underprivileged children in third-world countries by purchasing a doll or making one themselves. The funds are used to provide six essential vaccinations for children living in poverty-stricken countries.

Outside Korea, the Unicef project is carried out under culture-specific names such as Pigotta in Italy and Anna and Toivo in Finland, according to Chae Jung-ah, an official at Unicef Korea. (Since each Awoo doll represents a child, Unicef Korea uses the word “adopt” instead of “purchase” to describe the transaction.)

Creative minds can make an Awoo doll by purchasing a box of supplies from Unicef Korea. The set contains an instruction leaflet and a doll. The creator then decides on the doll’s hair and eye color and makes the clothes. The finished product is then “put up for adoption” when the creator sends it back to Unicef Korea. Awoo means younger brother in Korean.

If creative work is not something that suits you, you can “adopt” an Awoo doll by going to the Web site and making your selection. Since each Awoo creator is different, each doll comes with different clothes and each doll’s appearance is unique.