After stroke, filmmaker is back behind the camera

After stroke, filmmaker is back behind the camera 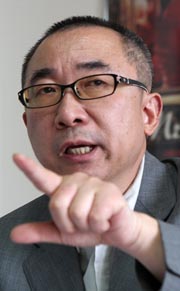 Legendary documentary filmmaker Kim Tae-young is back behind the camera after a debilitating stroke that had some saying his directing days were over.

Kim is known for broadening the landscape of Korean documentary film through works such as “An Odyssey into the Cinema World” and “Vietnam War and 17 Years Afterwards” in the 1990s and early 2000s.

After his first foray into commercial filmmaking with “2009 Lost Memories” starring Jang Dong-gun and Toru Nakamura in 2001, Kim suffered a devastating stroke in 2003 that left him unable to speak and the right side of his body paralyzed.

Kim, who is still severely disabled, is currently filming a documentary in the mountains of Tibet. The film, a 3-D documentary entitled the “Postwoman of Shangri-La Delivers Happiness,” will be released at the end of the year. Shangri-la is a mystical earthly utopia in James Hilton’s novel “Lost Horizon.”

The heroine of Kim’s film is a Tibetan woman called Nima Lamu, who has been a mail carrier for the last 17 years. She lives in an alpine region located at an altitude of 4,000 to 6,500 meters (13,123 to 21,325 feet) in Diqing Tibetan Autonomous Prefecture within Yunnan Province, China - one of the regions in the area that has claimed to be Shangri-La. She works 5.5 days and walks 117 kilometers (73 miles) a week, crossing from one side of the Lancang River to the other by sliding herself along a steel-wire pulley, her bulky 20-kilogram sack on her shoulders.

Kim returned to directing in 2009 after he had recovered some of his speech and movement, but he said the production period for this film was difficult.

“Everyone told me not to do it,” Kim said. “I had to lie to my doctor and told him that I wouldn’t go into the mountains of Tibet.”

When he arrived, he found the filming process was more arduous than he had imagined. It took a day by car to get from Diqing Airport to the shooting location. On the way back to his hotel, he suffered from flu-like symptoms brought on by altitude sickness.

Kim said he endured the difficult conditions because he believed Nima Lamu’s story needed to be told.

“Nima Lamu is such an innocent and diligent woman who embraces a holy calling through her work as a postwoman, a job that many Chinese avoid. But she believes she is a messenger, bringing good news,” he said.

“Though this work might seem trivial to others, devoting oneself to a holy calling is what happiness is all about. And that’s why I’ve decided to make this a documentary.”