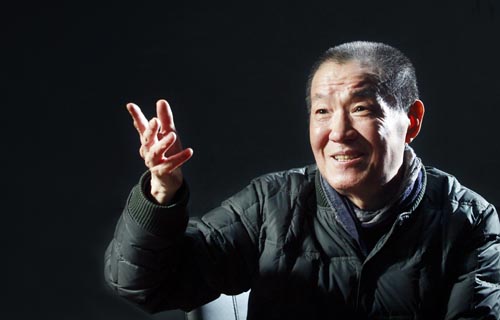 
When people think about the Korean Wave, K-pop groups like Girls’ Generation or television dramas like “Winter Sonata” usually come to mind. But a new sort of Korean Wave is now making its way across Europe with theatrical and dance companies presenting their works at world-class festivals.

The Edinburgh International Festival was founded in 1947 and showcases standout performances of all genres from classical and contemporary music, dance, theater and opera to visual arts. Artists can participate by invitation only. The annual festival will be held for three weeks this year in Edinburgh, Scotland, between Aug. 12 and Sept. 4.

The 2011 festival features many Asian artists, and Jonathan Mills, the festival’s artistic director, calls it “a journey of discovery and revelation in which the finest artists of these Asian countries and cultures share their virtuosity and skill with all of us in the Far West.”

The Korea JoongAng Daily sat down with Oh Tae-suk of the Mokwha Repertory Company in his studio in Daehangno on April 26 to talk about the upcoming Edinburgh festival and his work on The Tempest.


Q. Why did you decide to do The Tempest for the Edinburgh International Festival this year? 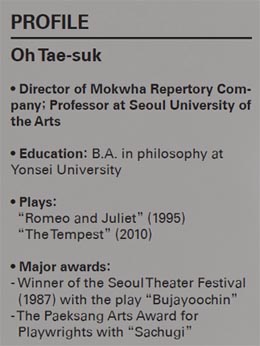 A. Our version of the play is freaking crazy. We were able to express all the ups and downs of the plot in the play. When [festival artistic director Jonathan Mills] came to see our play “Romeo and Juliet” in 2006 in London, he just kept on saying it was “amazing” how we made the performance that crazy. He and I had a talk afterward, and he said he wanted us to perform another Shakespeare piece and I suggested The Tempest since it is known as the last piece Shakespeare worked on and it is rarely played in Korean theaters. I thought it would be fun to work on this piece. Of course, Romeo and Juliet would be a more flawless performance since I’ve been doing that for the past 15 years. But it’s more fun to try to bloom another flower.

This play by William Shakespeare, as you said, is not well known by Korean audiences. You have intertwined Korean history in this performance. Did you see some connection between Korea and The Tempest’s story?

The story of the events happening in Milan and Naples in Italy is written by the British playwright. But there is no need to feel estranged just because we are doing a piece written by foreign authors about events in a foreign country. As the British playwright analyzed the story with a British sentiment, I just tried to apply Korean sentiment on top of that. Then I thought of our own history that’s similar. The Silla Dynasty and neighboring country Gaya in the 5th century had troubles near their borders, just as Milan and Naples did. And of course, it was fun adapting English-written lines to Korean ones to describe what had happened in earlier times, so that the beauty of our language is presented at its best. 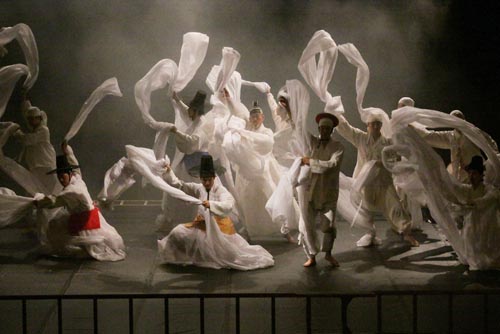 Oh Tae-suk’s “The Tempest,” which premiered in Korea in 2010, is going to be presented at the Edinburgh International Festival this year in mid-August. By 2DOHEE

It is. First of all, I followed the format of a three-four or four-four rhyme, so the conversation would sound almost like you are singing a song. [A three-four or four-four rhyme is used in a type of ancient Korean poetry called sijo.] So the unique rhythm we have with this rhyme stimulates the ears of the audience. It’s like reminding people all the things we have forgotten in our daily lives, and what a beautiful language we have.

In your opinion, in what field have you contributed the most to Korean theater?

I think I focused most on cleansing our own language. Young generations nowadays use Internet jargon or even digitize conversational language into some kind of code that the general public would not understand. Just having the right form of language recorded on tape or written in books is not enough. People need to use the proper language to communicate with others. That’s what I always tell my acting staff. We need to take initiative in preserving the beauty of our own language.

If you emphasize language so much, won’t it be difficult for non-Korean speakers to get the message you are trying to deliver through your performances?

No, actually, the message gets delivered much faster, and in much more diverse formats. I’ve seen more people crying after seeing my performances overseas. It’s all because they have more room to involve themselves in what’s happening on stage. Of course, Koreans will have an advantage in getting the message I want to deliver. But for anyone who doesn’t speak the language, it is like getting a giant white sheet of paper which they can fill with their imagination. Non-Korean speakers will apply what’s in their mind to the performance and will have an easier time relating the performance to their own lives. Basically, each of them becomes the writer for this performance. Still, they feel the Korean sentiment, because the lines are written according to the Korean rhythm.

You said previously that you are going to cut quite a lot from the original Tempest that you had presented in 2010 for the Edinburgh festival performance. How will you change the play?

For the Korean premiere we had to explain the details of the historical background since Koreans are not too familiar with the story. But at the Edinburgh festival, I’m going to cut a lot of the explanatory information, since if you fly all the way to see the festival you will likely bring some knowledge of the plays with you to the performances.

You mentioned that you are going to be cutting a lot of lines from the play as well.

Yes. I’m going to scrap the background information I put in just for the Korean audiences for the previous performance in Seoul. I focused on conveying Korean conversation style then. Since the verb comes in the end, normal Korean conversations have a very long introduction before actually getting to what people want to say. Those long introductions will all be scrapped. So with the more time and space I got from getting rid of all these, I will focus more on the rhythmical sound of the language, or take more time to explain the Korean-ness in the performance, such as describing the shadowy movement of people inside the room through the paper window, where only a single candle was lit. Or I would describe more about the curvy lines of hanbok [traditional Korean clothes]. The performance will become much simpler, so in a sense I can deliver much more diverse messages in the given time, since everything else will be cut.

Why do you usually include traditional Korean elements in the plays you direct?

It’s something we always had until Korea suffered historically because of many other powerful countries especially before the Japanese annexation period started in 1910. I’m here to reconnect what was common in Korean culture 100 years ago for the current generation. I think it’s natural for anyone to find their roots and try to revive them.