Crossing the line with political barbs

Crossing the line with political barbs 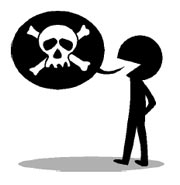 Winston Churchill will always be remembered for leading the United Kingdom to victory during World War II. On the battlefield, he was a determined commander who refused to accept defeat or surrender. At home, meanwhile, he stirred the nation through his moving and often witty commentary that helped improve public sentiment.

Barbs are commonplace in today’s politics and are often rehashed by the media again and again. It is common knowledge that the harsher a remark is, the longer it lasts in a person’s memory. Psychologists have shown that a person’s nervous system becomes more active and memory is improved when that person is emotionally stimulated, feeling rage, fear or happiness.

This has been an interesting year for politicians using sensational language in the United States.

In January, Representative Gabrielle Giffords, Democrat of Arizona, was the target of a shooting. Former Republican vice presidential nominee Sarah Palin was condemned afterward for her incendiary language. She had posted a map of the U.S. with crosshairs on politicians she disagreed with, including Giffords, before the shooting. Palin had also been campaigning using the slogan, “Don’t retreat, reload.”

The tragic event after Palin’s violent language led U.S. politicians to momentarily reconsider their use of hurtful barbs. But it wasn’t long before real estate mogul and possible presidential candidate Donald Trump brought sensational commentary back into politics.

After questioning President Barack Obama’s citizenship and academic records, Trump has set his sights on Korea. A few days ago, he said that America should demand that Korea pay for U.S. military installments in the country. Trump added that if the U.S. asked the Korean government to pay for U.S. protection, Korea would hand over money in mere minutes.

Trump’s remarks about Korea are completely absurd and outrageous, and we cannot just laugh off his rude barb.