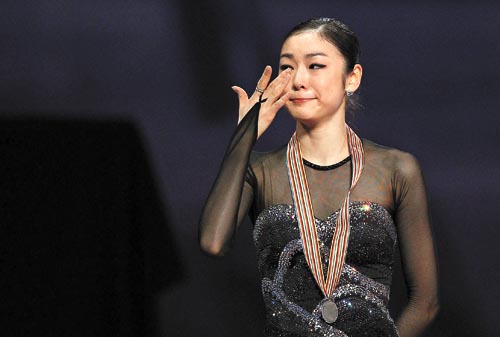 Kim Yu-na cries after being awarded the silver medal at the World Figure Skating Championships at the Megasport Arena in Moscow on Saturday. [YONHAP]

Kim earned 128.59 points for her free skating program on Saturday, finishing the event with total of 194.50 points. Miki Ando of Japan won her second world championship with 195.79 points.

Kim made two jump errors in her free skating program, missing a triple salchow-double toe loop combination and a triple flip, which lost her technical points.

The event was Kim’s first competition since the world championships last March. The 20-year-old skater was also the runner-up then, placing behind rival Mao Asada. Asada finished sixth Saturday.

After the championship, Kim announced through her agency that she would donate her prize money to Unicef to help relief efforts in Japan.