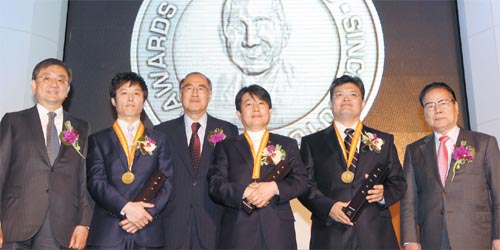 
The second annual Yumin Awards were handed out yesterday to three Koreans in recognition of their work in the fields of science, society and culture during a ceremony at the JoongAng Ilbo building in central Seoul.

The awards are given out in memory of JoongAng Ilbo’s co-founder and former chairman, Hong Jin-ki, for his emphasis on creativity in society.

Kim Eun-seong, a physics professor at the Korea Advanced Institute of Science and Technology, won the award in the category of Creative Science. The 39-year-old is also known as a competitive candidate for the upcoming Nobel Prizes.

“The various experiences that I had as student at Pusan National University led me to learn creativity,” Kim said. “I have dedicated myself to science so that I can be the representative of creative people in Korea.”

Lee Kang-rae, a professor in the business administration department at Wonkwang University, who founded an alternative school, Macji Education Institute in Gwangju, South Jeolla, for juvenile delinquents in 1997, won in the category of Creative Society.

“Before receiving this award, I learned that the former chairman had lived such a creative life before he died,” Lee said. “I hope he will give me a warm hug when I die and meet with him, saying ‘you deserved to receive the award.’ ”

A 42-year-old carpenter, Bahk Jong-sun, winner in the category of Creative Culture, is well-known for his style of wooden furniture. “When I heard I was the winner of the Yumin Award, I asked my friends and family how I would have to live my life to be deserving of the prize,” Bahk said. “They said ‘you just live the way you are.’ So I will go on in my way, but keeping the meaning of the prize in my mind.”