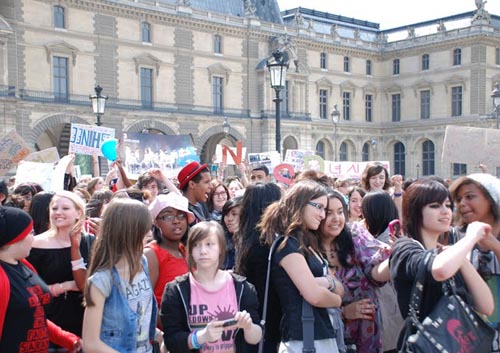 Fans rally in Paris on Sunday to demand that an additional Korean pop concert be held, after one sold out in 15 minutes. [YONHAP]


Hundreds of French fans rallied in front of the Louvre Museum in Paris on Sunday to demand an extension of a Korean pop concert that sold out in 15 minutes.

Some 300 young people picketed and danced to Korean pop tunes for over an hour, demanding that the concert scheduled for June 10 be extended by one day.

Korean pop culture, known as “Hallyu,” or the Korean Wave, has been gaining worldwide popularity in recent years. Girls’ Generation, Super Junior, SHINee and other top groups managed by the agency SM Entertainment are scheduled to perform at the Zenith de Paris concert hall, which seats more than 6,000 people.

“Because this is the first concert by SM singers in Europe, fans there are very enthusiastic,” said an agency official from Seoul.

“We’re considering holding an additional concert after looking into our singers’ schedules,” the official said, adding that fans at the rally were not only French but also from across Europe.

Some of the participants claimed that certain individuals had begun to scalp tickets after hoarding hundreds of them when they went on sale online on April 26. According to the demonstrators, scalped concert tickets were sold on the Internet at more than 500 euros ($742) per seat, while official ticket prices began at 51 euros per seat.

Singers from SM, the nation’s biggest entertainment agency, have been touring many countries including China, Japan and the United States over the past few years but this will be the first time the singers visit France. The Korean Embassy in France and the Korea Tourism Organization requested the concert.