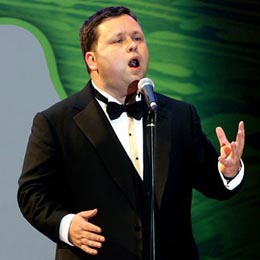 Paul Potts, a world-renowned opera singer, has been appointed as an honorary ambassador of Jeju Island, which is competing to become one of the “New7Wonders of Nature.” Organized by a Switzerland-based nonprofit organization called New7Wonders, Jeju Island was selected as one of 28 candidates among 77 sites around the world.

Jeju Island announced Monday that it had named Potts as its honorary ambassador in order to draw attention to Korea. It said that Potts will receive his certificate of honor at the Jeju Governor’s office on Friday, when he will also cast his vote for Jeju. Potts, along with American pianist Kevin Kern, will be holding a concert at the Jeju Art Center on Saturday.

Voting is open to the public and the final results of the New7Wonders competition are scheduled to be announced on Nov. 11.

After overcoming childhood bullying, an automobile accident and surgery to remove a tumor, Potts rose to stardom in Britain’s TV audition program “Britain’s Got Talent” in 2007.