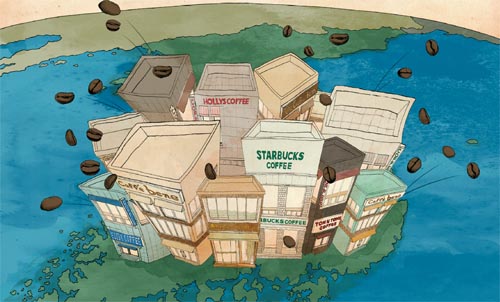 
Ever since its foray into Seoul in 1999, Starbucks has enjoyed its status as Korea’s first foreign take-out coffee chain. But its long-standing hold on the market began to slip last year as two homegrown competitors - Caffe Bene and Angel-in-us - began outpacing it in terms of number of branches nationwide as a result of aggressive expansion efforts.

As of April, the three-year-old Caffe Bene had 553 franchises and the 11-year-old Angel-in-us had 406. The number of Starbucks locations lags behind at 340.

Still, Starbucks managed to stay on top last year in terms of annual sales revenue at 240 billion won ($222 million), following double-digit growth from a year earlier. Its revenue is more than double that for Caffe Bene, which saw 105 billion won in sales.

Yet Caffe Bene’s explosive expansion has made the company a model for local franchises. Starbucks, as a point of comparison, took five years to open its 100th branch. But some industry insiders have started to question Caffe Bene’s expansion methods and sustainability.

Caffe Bene CEO Kim Sun-kwon has said in past media interviews that he launched the business because he thought Korea’s coffee market had the potential to grow further. Although Starbucks was already dominating the globe, he said it was high time that Korea had its own line of coffee shops - such as Canada’s Tim Hortons and Japan’s Doutor Coffee. Kim’s strategy was to make Caffe Bene distinct by adopting elements not found at rival overseas chains: a European interior accentuated by Korean touches.

“Coffee culture originated in Europe. Caffe Bene has adopted a vintage European interior to give visitors the feeling that they are at a European sidewalk cafe in the 19th century,” Kim said. “We offer an atmosphere that enables visitors to feel at home.”

Unlike most coffee chains that seek fast customer turnover, Kim says Caffe Bene strives to create a comfortable environment for visitors who not only drink coffee but also spend time reading books, listening to music and chatting with friends.

The franchise’s menu features a nutritious drink made of five grains that is mixed with milk, coffee with hongsam (or red ginseng), Belgian waffles and Italian gelato.

The menu is all about keeping with customer trends. Kang Hoon, a coffee expert whom Kim hired when Caffe Bene first launched, says coffee may not necessarily be a top priority for those who frequent coffee shops.

“My theory is that trends in coffee franchises change every 10 years,” Kang said. “It’s been 12 years since Starbucks landed here, and these days people go to coffee shops not only for coffee but also for food - sandwiches, cakes and other sweets.”

Han has been appearing in ad campaigns and television commercials for Caffe Bene for the past two years. In addition, robust product placements on television dramas have stamped the Caffe Bene brand on viewers’ memories.
The company is confident that it will see its 800th branch open by the end of the year.

In addition to the branches in major districts around the country, Caffe Bene’s niche market lies in highway rest stops, commercial banks and even churches, CEO Kim says.

Only 12 of the 553 Caffe Bene branches are directly managed by headquarters. The rest are franchises run by individuals. Starbucks branches, by contrast, are all controlled by Starbucks Korea. Because the majority of the branches are privately run, quality control remains an issue for Caffe Bene, even if the owners are trained by the company beforehand.

A blogger named “Sap” wrote, “The biggest problem with Caffe Bene is that the quality of drinks and services at its outlets is drastically different. Some of the outlets have serious management issues.”

And with Caffe Bene branches sprouting like mushrooms, sometimes even in the same neighborhood, owners have no choice but to compete with each other.

But so far, no shop has shut down because of flagging profits, according to Kim Dong-han, a Caffe Bene spokesman.

“We have over 500 branches and some produce good profits, but there are others that are not performing as well,” he said.

When “Caffe Bene franchise” is searched on Naver, there are numerous postings by franchise consultants saying many lucrative Caffe Bene shops are currently for sale, implying that many owners are already running from the business.

The brand’s growth potential is expected to slow early next year, Kang Hoon says: “The faster you grow, the faster you retreat.”

It is part of the reason Caffe Bene is gearing up to get listed on the Kosdaq by the end of this year, he explains. The company last year designated Daewoo Securities for its possible listing, but food and beverage analysts say they have yet to see much movement on the deal.

No coffee franchise in Korea has yet been listed on the stock market, mainly because of its trend-sensitive nature and fluctuations in sales and profits.

“It is obvious that Korean coffee franchises have reached a saturation point,” he said. “But once trend-sensitive Korean consumers hear that a specific business is booming, they rush to it without a second thought. And that sparked a boom in new coffee chains that began last year,” Kang said.

After foreseeing that dessert cafes would be the next big thing in Korea, Kang recently launched a dessert franchise called Mango Six.


A boom in the Korean coffee biz

Still, Caffe Bene’s success has inspired many to jump into the coffee business.

Interpark, the nation’s biggest online shopping site, joined the business last May by acquiring the De Chocolate Coffee chain from a now defunct entertainment agency. And Core Contents Media, which manages popular girl groups such as T-ara and See Ya, is set to start a franchise called Coffee Page One in July.

Industry data show that the country has entered a coffee renaissance. Koreans drank an average 312 cups of coffee per person last year, up from 283 cups the previous year, to reach its highest level ever, according to Statistics Korea. The total number of coffee shops under franchise is expected to exceed 3,000 this year, an increase of almost 1,000 from last year, according to market data.

“The rising number of coffee franchises is harmless to us, even if it comes from our rivals,” said a Starbucks spokesman. “What’s meaningful is that the brewed coffee market pie is getting bigger as a whole.”

The local coffee market is experiencing visible growth in instant and canned coffee products as well.

“We are expecting the instant coffee market to grow by about 10 percent this year to 1.3 trillion won,” said Choi Jae-ho, a spokesman with Namyang Dairies. Instant coffee refers to powdered coffee pre-mixed with cream and sugar in individual packets.

According to market research firm Nielsen Company Korea, canned coffee had the greatest growth in revenue among consumer goods last year with a 37 percent jump on-year.

Realizing that Korea’s coffee heyday may not last forever here, established Korean coffee chains have begun to look beyond the local market and have made inroads abroad.

Hollys Coffee was the first among them. The 13-year-old coffee brand opened its first overseas branch in Kuala Lumpur in November 2006, when it was the top local rival to Starbucks and the Coffee Bean. Although the brand’s initial goal was to open 50 outlets overseas by 2009, only two more have followed - one in Los Angeles’ Koreatown in 2008 and the other in Peru last year. As part of its localization plan, Hollys tried to lure customers with uniquely Korean drinks rather than coffee. In Malaysia, it sells sikhye, a traditional Korean sweet rice-malt drink, while its Los Angeles branch sells sweet potato latte.

Angel-in-us, managed by food and beverage conglomerate Lotte, followed suit in 2008. It now has eight outlets in China and four in Vietnam, two countries with a tea-drinking culture, the firm’s spokeswoman explained.

“We are still in the middle of the acclimation process,” she said, when asked about prospects for its overseas business.

Tom N Toms became the third homegrown brand to go abroad. Starting with a branch in Sydney in 2009, it has opened seven outlets in Australia, Thailand, Singapore and, most recently, Los Angeles. It has recently announced its goal to open more than 500 outlets abroad.

In August, Caffe Bene is set to advance into New York - a first for a Korean coffee house - on the first floor of the Crowne Plaza Hotel in Times Square, its spokesman Kim says. Market insiders estimate that the cost of opening a store in the coveted neighborhood will range between 5 billion won to 10 billion won.

Kim said corporate headquarters has dispatched a team of workers to do market research in New York prior to the opening.

When asked about its strategies for winning over what are, by all counts, some of the world’s most discerning coffee drinkers, he said the company was not yet ready to reveal them.

One market expert said, “More and more Korean coffee franchises will advance into foreign markets, but whether they succeed or not remains to be seen.”

Instant coffee products, on the other hand, are already showing strong performance overseas. Korean-style coffee mixes are gaining popularity in nations such as China, Russia and Israel. Combined exports of such products reached $130.40 million last year, up 1.7 percent from the previous year, according to data from the Korea Customs Service.