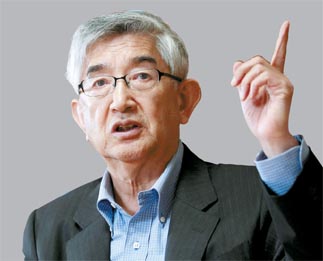 Leading liberal scholar Choi Jang-jip gained prominence with his 2001 book, “Democracy after democratization,” which describes political and social changes in Korea after the student democracy movement of the 1980s.

Choi has drawn public attention once again by writing about the theory of conservative political scientist Max Weber, in his new book of “Max Weber - Politics as a Vocation.”

The 68-year old professor emeritus at Korea University gave 12 public lectures in 2010 about political philosophers such as Plato, Machiavelli, Thomas Hobbes and Weber. After receiving an enthusiastic response for that lecture series, he embarked on a project to publish a series of books, with each devoted to one of the figures.

In an interview with the JoongAng Ilbo at his office in Gwanghwamun, central Seoul, Choi said Korean society needs to embrace Weber’s theory - which has been ignored by many liberal activists who favor Marxism - in order to develop democracy of Korea.

Choi added that Korean society has focused on keeping preventing dictatorships rather than nurturing a good leader, which has hindered the development of democracy in Korea.


Q. Why you did you select Max Weber as the first figure for your project on political philosophers?

A. I thought it would be good to introduce Weber, whose theory is the most needed to improve the current Korean political situation.

What characteristics of Weber’s theory have attracted you?

Although it’s been a quarter of a century since the student democracy movement resulted in the democratization in Korea, I don’t think we have had any good leaders yet and this has hindered the development of Korean democracy.

Weber was a thinker who studied the qualities and ethics of a politician more deeply than any other scholars.

What qualities do you think a good politician has to have?

Weber mentioned two ethics that a politician must possess: an ethic of ultimate ends and an ethic of responsibility, which contrast with each other. But Weber thinks keeping the two ethics, even though it’s hard to do, is the vocation of a politician.

Could you tell us more about the difficulty of retaining the two ethics?

Weber says a good politician has charisma and holds the ethic of ultimate ends and ethic of responsibility at the same time.

What does politics mean to Weber?

Weber says the nature of politics is violence and power. Politics in reality, he describes, is the “power of evil.” Weber also said, “It is not true that good comes from good and evil comes from evil.

You said Weber defines a good politician as the one with “charisma.” Does that “charisma” refer to what is used in our daily lives?

I can say that the meanings of the two terms - charisma in Weber’s theory and the other in our daily lives - are similar in the sense that the “charisma” Weber used means natural ability and charm. Before Weber used the term “charisma,” scholars had been using the term to refer to religious leaders. But Weber is the first person who popularized the term.

Many scholars have compared Weber’s theory with that of Karl Marx. What do you think?

But followers of Marxism can’t get out of the box of his theory and can’t think of alternatives to it.

How is Weber’s theory different from Marxism?

History can’t be explained and defined by a single factor and theory. It is not an organized and schematic plot where a single cause triggers a single result.

Weber has various aspects to his theory. When he was young, he studied social and economic class in capitalism just like Marx, but he developed his theory in a different way.

Do you have any ideas about the upcoming presidential and legislative elections to be held in 2012?

Korean leaders are now faced with two tasks - improving relations with North Korea and social integration. A leadership that harmonizes economic growth and social welfare is also needed at this point.