Jazz Fest has something for everyone, even Jon Bon Jovi

Jazz Fest has something for everyone, even Jon Bon Jovi 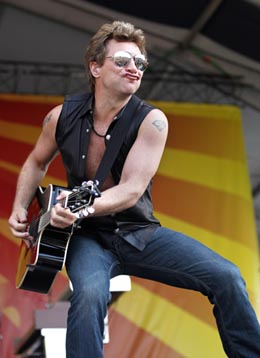 NEW ORLEANS, Louisiana - A sea of flowered shirts, colorful tank tops and straw hats sways to an infectious beat under a searing blue sky. Artists ranging from Bon Jovi to New Orleans jazz singer John Boutte pump tunes on multiple stages as an exuberant crowd delights in the experience of one of the world’s largest music festivals.

Robbie Alves, an audio engineer from Los Angeles, is nearly as comfortable in this setting as he is in his West Coast home.

“It’s maybe a little bit of escapism, but what’s wrong with that?” asked Alves, who has attended the New Orleans Jazz and Heritage Festival almost every spring for the past 20 years. This year’s festival began last weekend and continues this Thursday through Sunday.

Forty-two years after it began, the event known as Jazz Fest has become a 12-stage, seven-day blockbuster that features not only jazz but also blues, gospel, Cajun, zydeco, rock, funk, Latin and other styles.

It continues to draw music fans - 375,000 people paid an average of $40-$60 to spend a day at the fest last year - even as competition from other festivals has dramatically increased.

“A rock festival has a narrow group of kids that go to it. This festival, from the beginning, went out of its way not to do that,” said Quint Davis, producer and director of the event and CEO of Festival Productions Inc.

“This is a festival that’s for everybody. When Bon Jovi is on that stage, Pete Fountain is over on that one, Jason Mraz is over there and Fantasia is in the middle.”

Since the 1950s, when the Newport Jazz Festival popularized the concept of live music performed in an outdoor setting, music festivals have become a fixture of America’s cultural landscape.

New events sprout yearly as producers seek to match the success of such stalwarts as the Coachella Valley Music & Arts Festival in California, Chicago’s Lollapalooza, Austin City Limits Music Festival in Texas, Sasquatch! Music Festival in Washington, and Tennessee’s Bonnaroo Music and Arts Festival. But the laid-back vibe that characterizes these events belies their underlying challenge. Achieving just the right mix of music, location and amenities - such as food, parking and overnight accommodations - is a balancing act with a high risk of failure.

During a music industry conference held in New Orleans over the weekend, Larry Vallon, an executive vice president with AEG Live, the largest producer of music festivals in North America, ticked off names of festivals around the country that launched and were shut down within just the last few years: Rothbury Festival in Michigan, All Points West Music & Arts Festival in New Jersey, Mile High Festival in Denver.

Despite headliners like Coldplay, Bob Dylan, Willie Nelson and the Dave Mathews Band, the events “just did not resonate.”

“The competition is really, really intense,” said Danny Melnick, artistic director of the 34-year-old Freihofer’s Saratoga Jazz Festival in upstate New York. Speaking during the conference, he said the trick is to build audience loyalty.

“And it’s not necessarily just about the music,” Melnick said. “It’s really about the experience of being at the festival.”

Davis said the Jazz Fest’s emphasis on cultural heritage, including Louisiana arts and crafts and Native American traditions, distinguishes it from many other festivals.

He said they love to see Louisiana blues-rocker Tab Benoit, and they like the idea of going to a festival that’s fun for the adults and the kids.

“You couldn’t get this anywhere else,” he said.