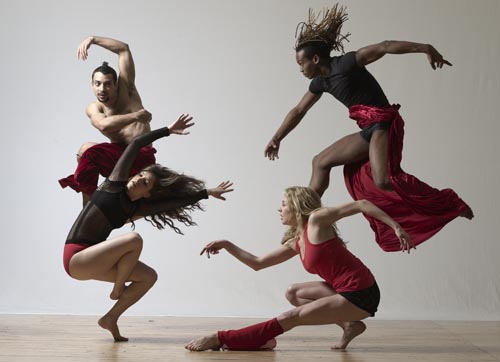 The Parsons Dance Company will perform critically acclaimed works “Caught” and “Remember Me” at the LG Arts Center, southern Seoul, from today to May 8. See THEATER. Provided by LG Arts Center

Kern is known for his songs “Return to Love” and “Le Jardin,” which have been featured in Korean television dramas. He has also had hits with songs such as “Kristine’s Serenade,” Sundial Dream” and “The Winding Path.”

Today: Canadian singer-songwriter Avril Lavigne is coming to Korea to promote her latest album, “Goodbye Lullaby,” which was released in March. The album is the fourth of her career and her first since her divorce from Deryck Whibley, the lead singer of Sum 41.

Lavigne made it big at the age of 17 with hit songs like “Sk8er boi,” “Complicated” and “My Happy Ending.”

These hits are on the program today, along with songs from the new album including “What the Hell,” “Goodbye” and “Everybody Hurts.”

Tomorrow and Saturday: Soprano Sumi Jo is having two days of concerts to celebrate the 25th anniversary of her debut.

She will be joined by British conductor Richard Egarr and the Academy of Ancient Music, a period-instrument orchestra from England.

The majority of the program features the music of Handel and Vivaldi, including Handel’s Concerto Grosso, Op. 3, No. 2, and Vivaldi’s “Sposa Son Disprezzata” from his opera “Bajazet.”

Sunday: American hard rock band Mr. Big is making its second visit to Korea after its sold out concert in 2009.

Founded in 1988 by Billy Sheehan (bass), Eric Martin (lead vocal), Paul Gilbert (guitar) and Pat Torpey (drums), Mr. Big has continued to churn out the hits despite a break up in 2002 and subsequent reunion. They are known for their infectious, hard-driving rhythms and incredible musical talent.

The band released their first album in 10 years, “What If,” in January, and it has garnered a favorable critical response.

The concert will feature hits like “To Be With You,” a No. 1 single in 15 countries in 1991, and songs from their new album, including “Undertow” and “American Beauty.”

Tuesday: Grammy-winning jazz pianist Herbie Hancock returns to Korea for the first time in years with his new album, “The Imagine Project,” which was released just after his 70th birthday last year. This album was made with members of The Imagine Project Band, including keyboardist Greg Phillinganes, vocalist Kristina Train, bass player James Genus and drummer Trevor Lawrence Jr. - all of whom are scheduled to appear with Hancock.

At the concert, Hancock will perform pieces from his latest album and previous hits such as “A Tribute to Miles,” “Speak Like a Child,” and “My Ship.”

May 15: Grammy-winning conductor Arnold “Arnie” Roth and Korea’s Ditto Orchestra present theme songs played in the Barbie movies. The program includes the theme song from “Barbie in the 12 Dancing Princesses” (2006) - Mendelssohn’s Symphony No. 4 in A, Op. 90 - and the theme from “Barbie and the Magic of Pegasus” (2005) - Beethoven’s Symphony No. 6, Op. 68, “Pastorale.”

Today to Sunday: The legendary Parsons Dance Company lands in Korea with two critically-acclaimed works, “Caught” and “Remember Me.”

“Caught” is David Parsons’ unforgettable signature strobe-light solo featuring a dancer defying gravity and flying above the stage as he performs more than 100 leaps in less than six minutes.

This piece was performed more than 100 times worldwide for more than 28 years.

“Remember Me” is a rock dance opera and a modern retelling of a tragic love story that also features the lead vocalists and music of the Grammy-nominated rock opera band East Village Opera Company.

The story revolves around the mysterious inventor Dr. Coppelius, who has created a life-sized doll named Coppelia.

The doll is so lifelike that she attracts the attention of a town bachelor, Frantz, who is soon to be wed but tries to woo Coppelia instead. When Frantz’s fiancee see him courting Coppelia, she dresses up as the doll to show him just how silly his ambitions are.

The dance was choreographed by James Jeon, who spent 10 years as the artistic director of the Seoul Ballet Theater.

To May 29: Cirque du Soleil returns to Korea for the first time in three years with a new production, “Varekei,” which is based on the Greek myth of Icarus. To tell the tale, the world-renowned troupe employs spectacular costumes, intricate sets, a multilayered soundscape and its usual high-flying mixture of circus tricks and acrobatic choreography.

Today to Tuesday: The Hi Seoul Festival returns with a new series of nonverbal performances by local and international companies. The program includes shows like “The Tourists,” a puppet show by French company Les Grandes Personnes, and “The SWAT,” a piece of street theater by another French company, Carnage Productions.

The festival program also includes an art exhibition installed along Cheonggye Plaza that features works by 11 artists from overseas and five local artists, as well as a street campaign for nonprofit organizations like Good Neighbors, World Vision and The Beautiful Store.

May 9 to 12: This year’s Jazz Festival features a program of performances by renowned local and overseas artists.

On the first day, American musical director Kolleen Park will perform with special guests like Jang Jae-in, one of the finalists of reality competition show “Superstar K.”