Barcelona fans singing in the rain

Barcelona fans singing in the rain 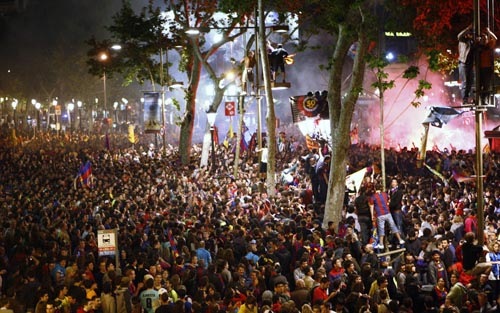 Barcelona’s supporters celebrate after their team qualified for the Champions League final after beating Real Madrid in their semifinal soccer match in central Barcelona, Tuesday. [REUTERS/YONHAP]


In the 1992 European Cup final, an extra-time free kick from Dutch defender Ronald Koeman won Barcelona its first European Cup. Pedro’s goal in the 54th minute of yesterday’s Champions League semifinal second leg earned Barcelona a 1-1 draw on the night and a 3-1 aggregate victory over their biggest rival, Real Madrid, to send the Catalunyan club back to the venue of that first victory in 1992, Wembley.

Goals from Lionel Messi in the first leg, dubbed by some as the “game of shame,” due to the antics of players from both sides, gave Barca what turned out to be an unassailable lead over nine-time champions Real Madrid in a sodden Nou Camp.

In stark contrast to the first leg, this was a game befitting of the world’s premier club football competition. There was almost no diving and players who were fouled picked them selves up in a timely fashion. Barca, playing at home, dominated the first half with passing football that was a joy to watch. Their game plan was likely to get to half time without conceding a goal and then come out and attack. The fact that Madrid didn’t trouble Barca keeper Victor Valdes once in the first half is testament to that. Iker Casillas in the Madrid goal did his part to keep a clean sheet with a string of excellent saves. Following this season’s other four “classicos,” the game was 0-0 at half time. And like the other classicos this season, this match was set to be dominated by Messi and Ronaldo. Both players tried to impress themselves on the game, but Messi came out on top. 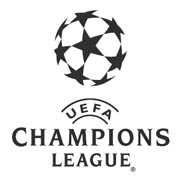 One notable absentee was Real manager Jose Mourinho, who was banned from the touchline for an outburst in the first leg and decided not to appear at the stadium.

If the players restored some faith in football fans around the world with professional attitudes and a respect for the game, the referee allowed them to do it. Frank de Bleeckere was as much of a credit to referees as the two teams were to football itself. He booked Real defender Ricardo Carvalho early in the first half, yet resisted producing a second yellow on several occasions in an effort to maintain calm and keep the game flowing.

It wasn’t until the 54th minute that the game opened up. A brilliant through ball from Andres Iniesta left Pedro with the task of slotting the ball into the bottom right corner of the Real net with his left foot. Emmanuel Adebayor came straight on as Real made changes to try and get themselves back into the game. Minutes after coming on, a foul by the Togolese international threatened to descend the tie back into the madness of the first leg but sensible refereeing prevailed once again.

Real played with much more purpose in the second half, and even after Pedro’s goal seemed to have killed the tie off, Real were not giving up.

Barca passed at times with a confident arrogance that drew cheers from the home fans on more than one occasion, but an intercepted pass by former Liverpool player Xabi Alonso and the ensuing sequence gave Madrid some life. Alonso played the ball through to Angel di Maria, who lashed a left-footed shot against the post. The ball rebounded kindly for Madrid and fell straight back to di Maria, who cleverly picked out Marcelo - unmarked and screaming for the ball in the center of the box - who scored to give Madrid at least a fighting chance. 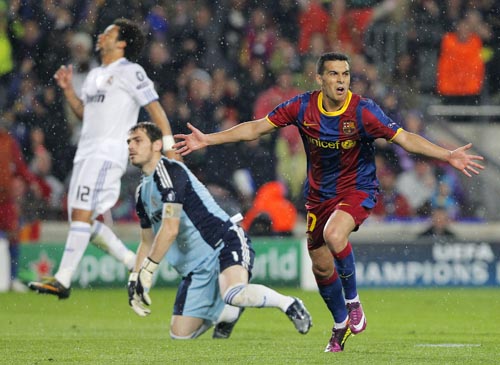 
Madrid needed two more goals but Barca was not content to sit back and protect its lead. With Schalke and Man United surely watching in anticipation of a date in the final, Barca perhaps wanted to send a message to whichever team they meet in London and attacked at will, even though they had the game sewn up.

Javier Mascherano showed glimpses of what the first semifinal leg was about when he pathetically overreacted to a foul from Diarra, who was arguably Madrid’s best player. Adebayor was eventually booked in the 85th minute after a series of rough challenges, but by that time it was practically over for Madrid. Carles Puyol, the Barca captain and Nou Camp legend, was substituted by Pep Guardiola to a standing ovation and was replaced by Eric Abidal. If the applause for Puyol was loud, then the roar for Abidal was enormous. The French international was diagnosed with cancer in February and had an operation to remove a tumor in March. At the final whistle, the jubilant Barca players huddled together in celebration, with Abidal right in the center. To cap a night of pure football with none of the cynical diving and simulating that dogged the first leg, Abidal was thrown up and down in the huddle by the Barca players.

Madrid is now left to deal with yet another disappointing loss.

“Another [setback], like always,’’ Casillas told The Associated Press after Barcelona’s players celebrated on the pitch. “We’re not going to get upset because it will just be used against us.’’

“The last 20 days have been really hard, a lot of tension,’’ Guardiola told The Associated Press before praising his opposite number despite matches marked by taunting, hostility and accusations. “[They’re] probably the best team in the world apart from my team, maybe.’’

Barca will watch the other semifinal tonight in a relaxed and confident mood knowing full well it is going to take a herculean effort to stop them from winning their fourth title.